A new study by scientists at Metro Infectious Disease Consultants and published on the preprint server medRxiv* in June 2020 reports that the cytokine blocker tocilizumab is a useful adjunct to supportive medical care in severe COVID-19, with increased survival and a lower requirement for mechanical ventilation.

Severe acute respiratory syndrome coronavirus 2 (SARS-CoV-2) is a novel coronavirus that emerged in China towards the end of the year 2019 but rapidly spread worldwide to become a pandemic. As many as 20% of patients progress to severe disease, and up to 10% may die of terminal respiratory failure secondary to acute respiratory distress syndrome (ARDS). This percentage varies with the population segment affected, with the highest risk being seen among older adults and those with other medical conditions such as type 2 diabetes, obesity, and hypertension. 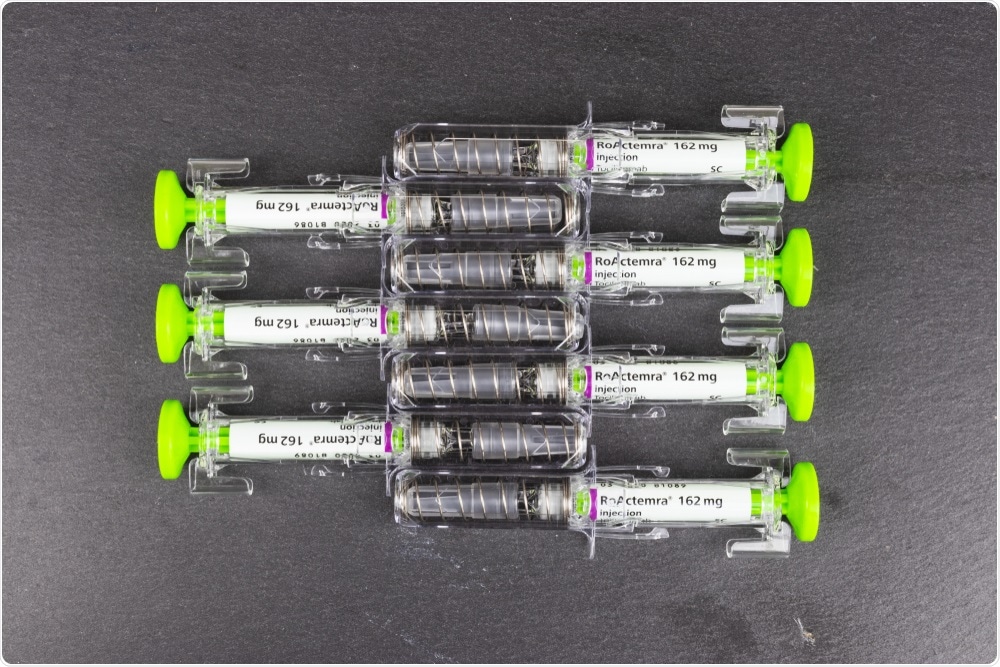 The spectrum of illness with COVID-19 varies from asymptomatic or mild symptomatic infection in the majority of cases to progressive pulmonary impairment with a pneumonia-like picture, and finally to rapid multi-organ dysfunction with ARDS and cardiovascular collapse. During this stage, the levels of multiple inflammatory cytokines and markers are raised, including IL-2, IL-6, C-reactive protein (CRP), ferritin, D-dimer, and lactate dehydrogenase (LDH).

There is no specific treatment or vaccine strategy as of now that is effective against SARS-CoV-2. However, the IL-6 blocker tocilizumab has been explored as a possible therapy for immunomodulation, to mute the so-called cytokine storm, the excessive and damaging rise in pro-inflammatory cytokines, in the final stage of severe COVID-19.

This drug is already approved for the treatment of rheumatoid arthritis and the cytokine release syndrome associated with the CAR-T cell treatment of cancer patients. This last condition is very similar to the pathogenesis of the cytokine storm in severe COVID-19 and justifies the experimental use of tocilizumab in the latter stage.

At present, tocilizumab is used at 4-8 mg/kg (max: 800mg per dose) intravenous infusion, repeated once if necessary. The current study was designed to find the actual benefit and the optimal regimen for this drug in COVID-19 patients with the most severe illness.

Study on Tocilizumab Timing and Benefits

The study was made up of 157 patients who were admitted to hospital between March 13, 2020, and April 16, 2020. A retrospective study was done using medical records from multiple practices to retrieve the age, sex, duration of hospital stay, need for mechanical ventilation, the use of steroids and other drugs, and remdesivir. The presence and type of comorbidity were also analyzed, including risk factors like age above 60 years, diabetes, chronic obstructive pulmonary disease, bronchospasm, chronic cardiac or renal disease, immunodeficiency, and cancer.

The dose of tocilizumab was registered as early or late, depending on whether it was given before or within a day after intubation, or later than this, respectively. If the patient was not intubated, the dose was related to the date of admission. The patient outcomes included discharge from hospital, death, or continued hospitalization.

The average patient age was 58 years, and 65% were male. About 40% and 30% were White and Black, respectively, with 22% being Hispanic and a small percentage of Asians. 69% had other illnesses. All patients had raised inflammatory markers on admission.

Steroids were given to 60%, and 99% received hydroxychloroquine and azithromycin. About 85% of patients were given one dose of tocilizumab, and 15% had two doses 12 hours apart. The majority received 4 mg/kg, up to 400 mg in total, while nine patients received 600 or 800 mg.

In patients who required mechanical ventilation, the timing of tocilizumab was related to the mortality, with a lower mortality rate among those who received the tocilizumab earlier, compared to later dosing (14% v 868%) after accounting for demographic differences. The rate of discharge was also significantly higher in the early-tocilizumab group, at 60%, compared to 18% in the late tocilizumab group of patients.

The time from intubation to dosing was the only predictor for discharge following intubation. Again, later tocilizumab administration increased the odds of death in mechanically ventilated patients by 18-fold compared to earlier administration. Among early-tocilizumab patients, non-whites were 6 times more likely to die than whites.

Among those who had two doses of tocilizumab, half were intubated. Half were discharged, 23% died, and 32% were still in hospital at the time of analysis. When those who chose not to be put on ventilation via living wills, about 14% of whites and 32% of non-whites died, focusing attention on the continuing but little understood tendency for non-whites to have higher mortality.

Despite the observational nature of the study, some conclusions were arrived at. Severe drug reactions were rare. However, the use of multiple drugs made it almost impossible to disentangle the effects of any individual drug. This mandates further research with randomized studies.

The study sums up: “While the optimal time to dose tocilizumab has not been previously established, our data strongly support a mortality benefit of dosing tocilizumab early and within 1 day of intubation. Accordingly, we strongly encourage the use of this agent earlier in the COVID-19 treatment spectrum.”

medRxiv publishes preliminary scientific reports that are not peer-reviewed and, therefore, should not be regarded as conclusive, guide clinical practice/health-related behavior, or treated as established information.