This story also ran on Vice.
This story can be republished for free (details).

Back when Cody Gabbard was shooting heroin, his only significant human contact was with others in the throes of addiction, who only cared to see him when he had drugs.

Then he walked into the basement of Fayette County’s courthouse in the eastern Indiana city of Connersville, where two women — a public health nurse and a recovery coach — ran a syringe exchange program.

“There were days I went in there, to be honest with you, I just felt like killing myself. That would usually change by their spirits,” said the now-27-year-old Gabbard, who contracted hepatitis C during his drug use. “As people say, a smile can do a lot for a person, and it certainly does, especially when you’re in a dark spot in life.” 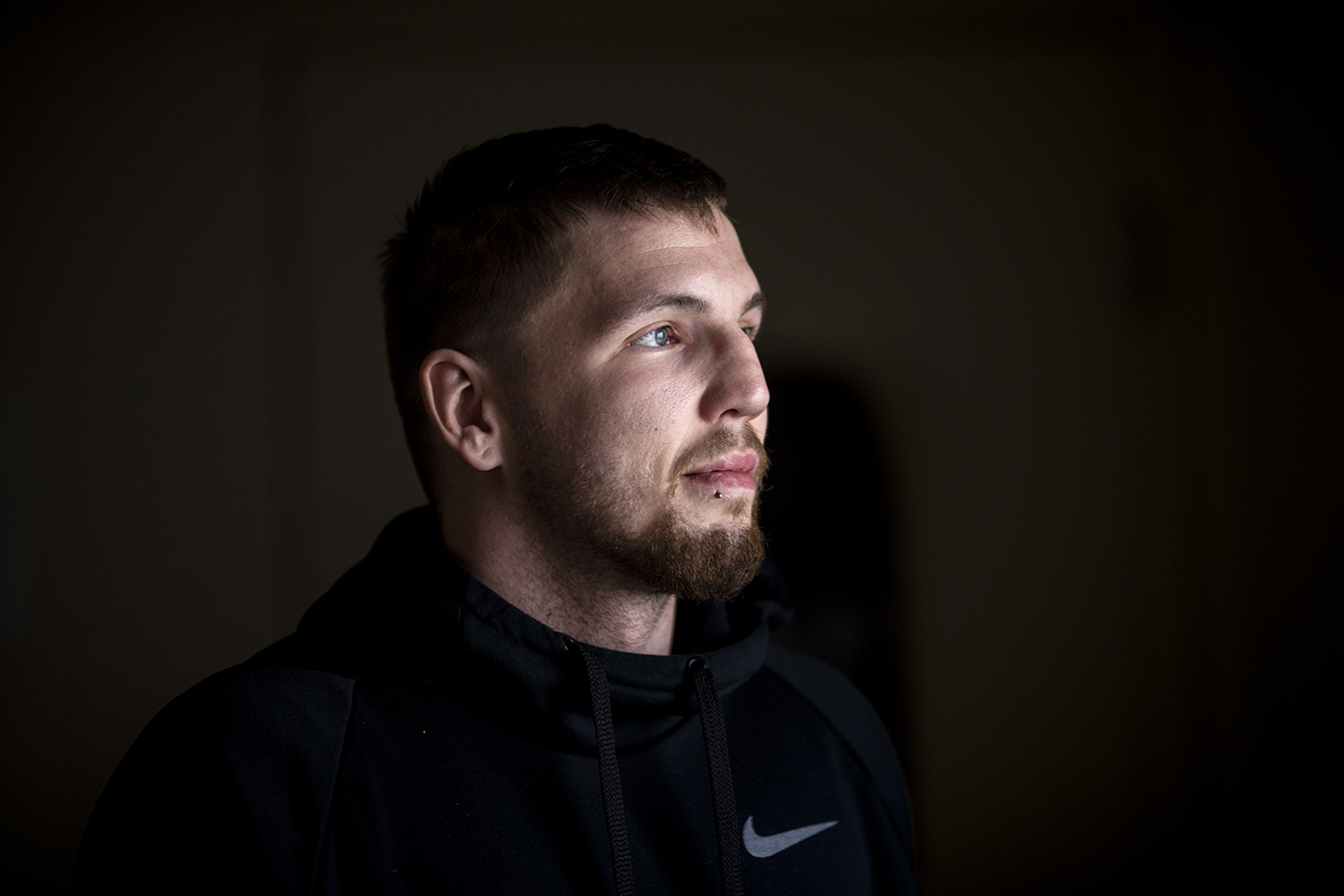 Cody Gabbard poses for a portrait at Fayette County Community Corrections in Connersville, Indiana, on Jan. 23, 2020, when he was participating in a work-release program. Now in recovery, Gabbard previously used a syringe exchange in Connersville. He recalls that the women who operated the exchange were not only the first people in a long time who treated him like a human being, but they also put a new idea in his head: You don’t have to live like this.(Meg Vogel for KHN)

Besides hope and connection, the program he visited in 2017 offered free, clean needles and a place to dispose of dirty ones. People could also get HIV and hepatitis C testing, the overdose-reversal drug naloxone, fentanyl test strips, immunizations and wound care, plus referrals to drug treatment and other community resources.

Such programs were illegal in Indiana until 2015. That’s when an HIV outbreak among injection drug users in southern Indiana’s Scott County caused lawmakers to reconsider their objections to syringe exchanges, making the state ground zero for conservatives’ growing acceptance of giving clean needles to people struggling with addiction.

But five years later, syringe exchanges are operating in only nine of Indiana’s 92 counties, including Fayette, even though federal health officials warn that eight more are vulnerable to an HIV outbreak similar to Scott County’s. Some public health experts say this reflects a continuing reluctance to treat addiction as a health issue and the political and logistical difficulties of starting exchanges and keeping them open.

“We’ve definitely made a lot of progress since the Scott County outbreak,” said Don Des Jarlais, a professor in the School of Global Public Health at New York University, noting that the number of syringe exchanges nationwide has roughly doubled since 2015. “But we still have a very, very long way to go.” 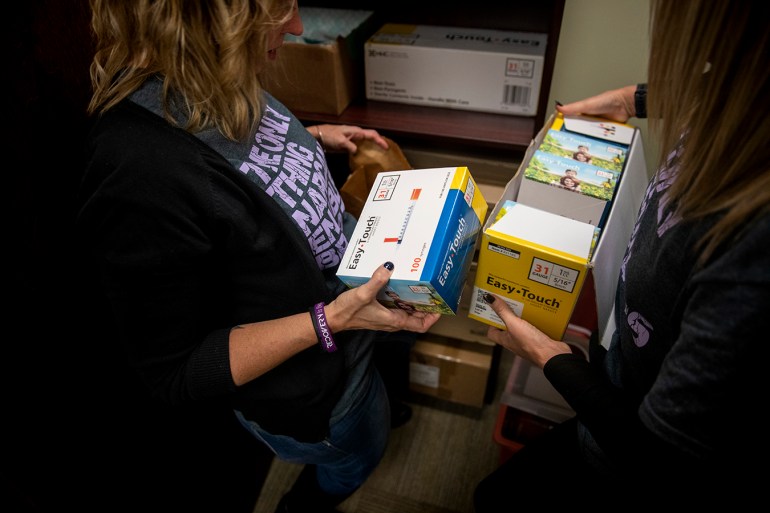 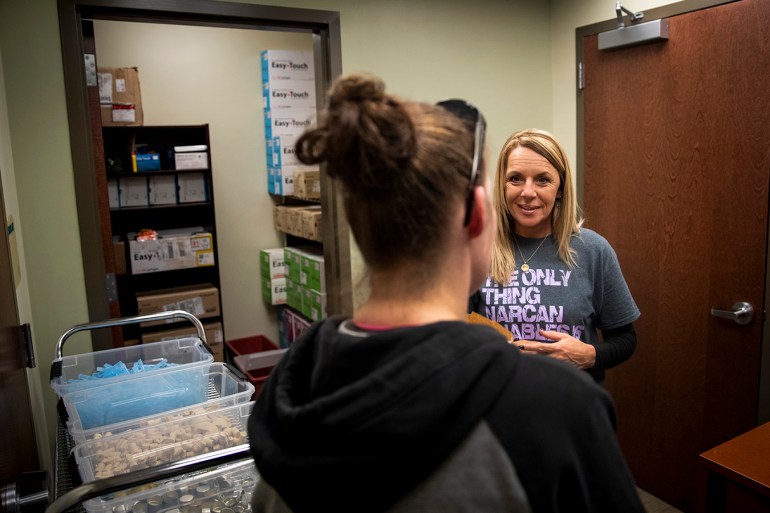 Charmin Gabbard, who runs the Fayette County Harm Reduction Alliance syringe exchange, talks with a participant on Jan. 23, 2020. The syringe exchange is open twice a week at the offices of Meridian Health in Connersville, Indiana. Gabbard says she hopes to increase its hours of operation and extend services to perform street outreach.(Meg Vogel for KHN)

In Indiana and West Virginia, he said, syringe exchanges have shut down or had restrictions placed on them because of backlash in the communities. This has happened despite decades of research showing that syringe programs prevent the spread of disease and reduce health care costs without increasing illegal drug use or crime.

Other conservative states that lifted restrictions on syringe exchanges in the wake of Indiana’s HIV outbreak have fared better. For instance, Kentucky and North Carolina, which eased regulations in 2015 and 2016, respectively, both have exchanges available in about half their counties. 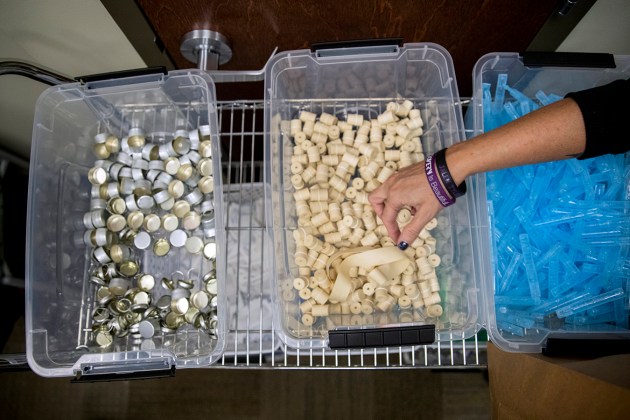 Darci Moore, an intern at the Fayette County Harm Reduction Alliance, collects safe injection equipment for a participant at the syringe exchange in Connersville, Indiana, on Jan. 23, 2020.(Meg Vogel for KHN)

Indiana state Rep. Ed Clere, a Republican who authored the original needle exchange legislation in 2015, would like to see greater acceptance of the programs in his state.

“Syringe service programs have saved countless lives and prevented countless cases of HIV and hepatitis C,” he said. “I see how well it’s working in the counties that have a program, and I hate it that syringe programs aren’t available for all Hoosiers.”

Indiana’s law requires syringe exchanges to be authorized by either a county’s executive body or a municipality’s legislative body, and then be renewed at least every two years. Alternatively, Indiana’s health commissioner can declare a local state of emergency. The statewide law, once set to expire in 2019, was amended to end on July 1, 2021. A bill in the Indiana Senate to repeal the expiration date was defeated in early February.

Since April 2015, when the first legal syringe exchange opened in Scott County, nine more have launched across the state. Three have closed, with two of them eventually reopening.

The bigger issue is “we have a lot of communities that want to get one started, but they can’t,” said Indiana University researcher Carrie Lawrence.

Enabling Drug Use Or Saving Lives?

Instead, some local health departments in Indiana have resorted to distributing so-called harm reduction kits that include everything but syringes, such as sterile supplies to cook, snort and smoke narcotics. Still, these, too, have drawn the ire of some politicians and law enforcement.

“We’re handing people equipment we know [is] going to be used for injection or ingestion of narcotics. We’re not getting anywhere,” said Lt. John Watson, a police officer in Seymour, Indiana, who has spoken out against his county health department’s harm reduction program. 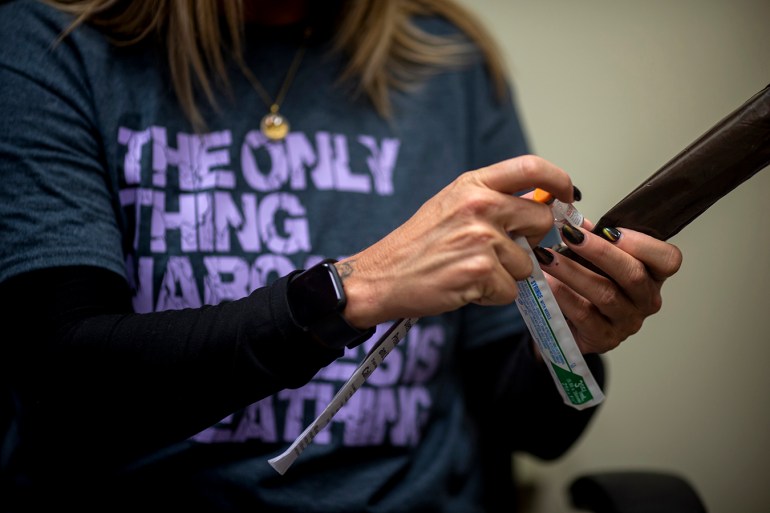 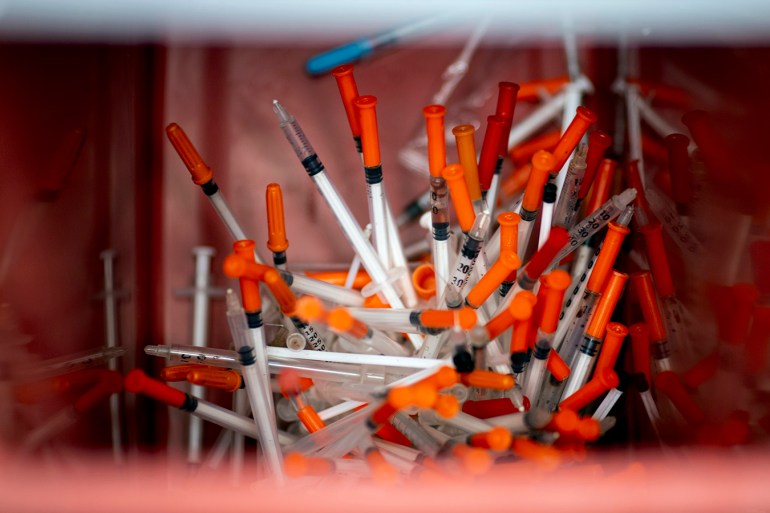 The syringe exchange run by the Fayette County Harm Reduction Alliance provides access to and disposal of syringes and injection equipment. (Meg Vogel for KHN)

But public health officials argue that the supplies are critical to stopping the spread of infection, and that people will get high regardless of whether they have clean equipment.

“They’re going to use a spoon. But they’re going to use their mother’s kitchen spoon instead,” noted Khala Hochstedler, administrator of the Tippecanoe County Health Department, which has operated an exchange since 2017. “That could have hepatitis C on it, and another family member could pick it up.”

One of the most vocal opponents of the syringe service programs has been Indiana Attorney General Curtis Hill, who argues for strict one-on-one exchanges of used needles for clean ones.

“Distributing needles without any reasonable degree of accountability … simply leads to wider abuse of illegal drugs and increased likelihood of death by overdose,” he said in a statement, citing anecdotal testimony from public safety officials he had visited throughout the state. He also pointed to a media report from Richmond, Indiana, saying the county prosecutor had documented a fatal overdose involving a needle from the local syringe exchange.

The Centers for Disease Control and Prevention cites research showing that syringe exchanges reduce the amount of needle waste in a community, by providing avenues for safe disposal; in the past, Hill has publicly quarreled with the agency over its research. According to the Indiana State Department of Health, 82% of syringes distributed by the programs have been returned.

Indiana has seen a drop in new HIV diagnoses linked to injection drug use — from 175 in 2015, the year of the outbreak, to 17 three years later. During that period, new hepatitis C cases rose from 7,144 to 7,837, though some syringe exchange officials said they expected those numbers to initially increase as more people got tested. 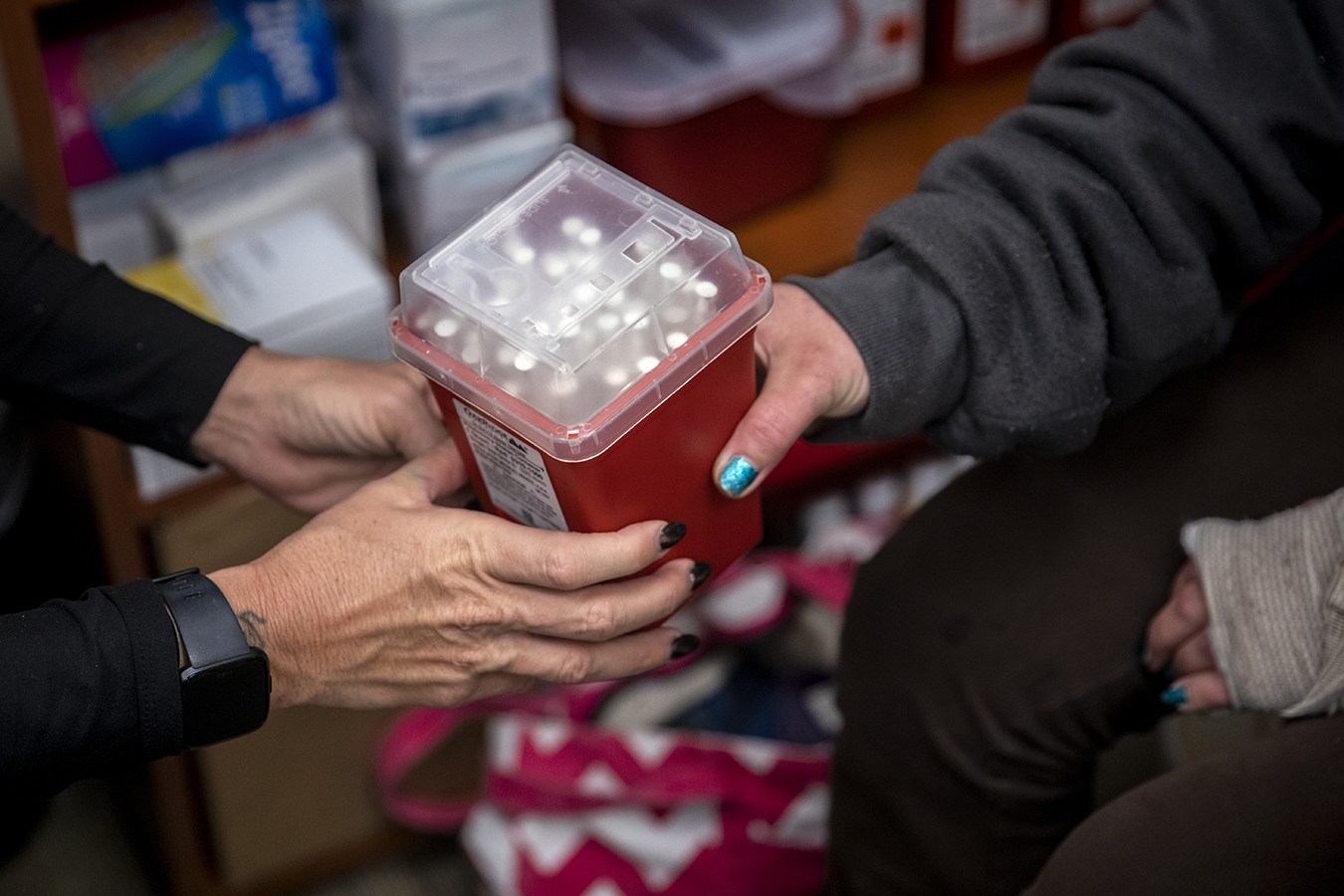 A participant gives Charmin Gabbard used syringes that she had been collecting in a disposal box for used needles for months at the syringe exchange run by the Fayette County Harm Reduction Alliance in Connersville, Indiana, on Jan. 23, 2020. The participant said she would reuse the needles until they “felt like a fishing hook and hurt.”(Meg Vogel for KHN)

Stephenie Grimes, administrator for the Madison County Health Department, said she finds one-for-one exchanges problematic because staffers are forced to ask confrontational questions that might turn people away. Users bring their soiled needles back in disposal containers that are not transparent, so you can’t tell how many syringes are inside.

“There is no good way to ensure you’re getting one for one,” she said.

In 2016, a year after an exchange started in her central Indiana community, her agency went to the one-for-one model to address public concerns. Opponents weren’t assuaged. 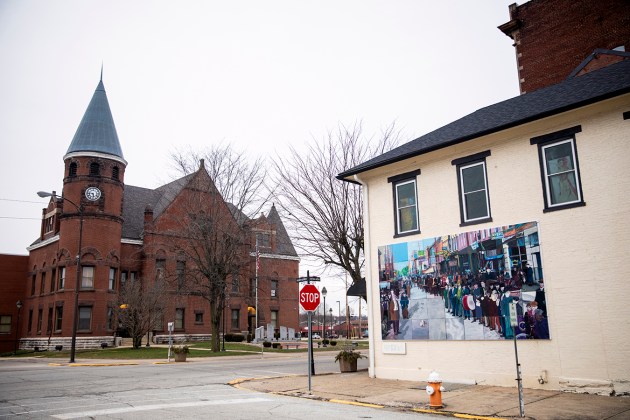 The Fayette County Courthouse is a historic courthouse located in Connersville, Indiana, on Central Avenue. Back when Cody Gabbard was shooting heroin, he would go to a syringe exchange program in the basement of the courthouse.(Meg Vogel for KHN)

The following year, even though the Madison County commissioners — the county’s executive body — had renewed the exchange, the county council — the fiscal body — voted to pull funding for the health department if it continued the program.

The initiative shut down for 12 months until a local nonprofit health system, Aspire Indiana, agreed to operate it.

About 120 miles away, in southern Indiana, Lawrence County abandoned its syringe exchange in 2017, after only a year, when county commissioners expressed concerns about abetting illegal drug use. Commissioner Rodney Fish elicited national attention when he cited a verse from the Old Testament that commands people to pray and “turn from their wicked ways.”

Reached in December, Fish said his opinion on the matter hasn’t changed and added: “Our community is dealing with the issue in other, compassionate ways.” He declined to comment further.

The syringe exchange in Connersville, where Gabbard used to go, shut down last May after the local hospital where it had moved, Fayette Regional, went bankrupt and closed.

But the exchange reopened Jan. 22 at Meridian Health’s Connersville clinic. The program aims to serve the same number of people it did before, about 100 a month.

Gabbard recalled that the women who operated the exchange not only were the first people in a long time who treated him like a human being, they also put a new idea in his head: You don’t have to live like this.

So after his last narcotics-related arrest, in June 2018, he opted for drug court, which allows defendants to get treatment in lieu of jail time.

Research has found that IV drug users who go to a syringe exchange are significantly more likely to enter treatment and stop or cut back on shooting narcotics than those who don’t.

“Really, the needle exchange was the reason why I even started to think about getting clean,” Gabbard said.

Now in recovery, he hopes to be a better role model for his 7-year-old son. He has dreams of starting a landscaping business. And he no longer needs a syringe exchange. 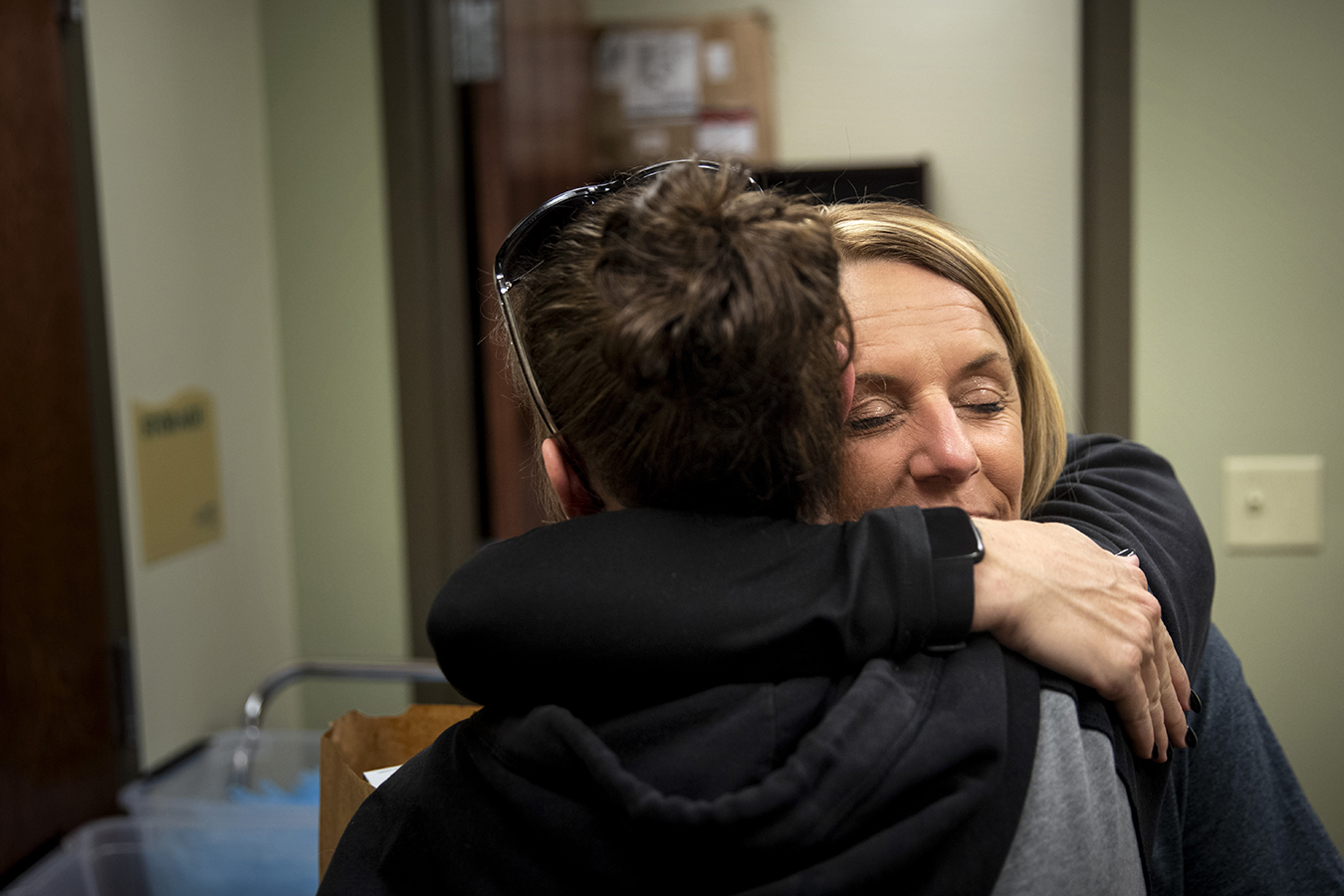 Charmin Gabbard, who runs a syringe exchange through the Fayette County Harm Reduction Alliance in Connersville, Indiana, embraces a participant on Jan. 23, 2020. Gabbard used drugs for almost 30 years and served about 10 years in prison, but she has been in recovery for six years.(Meg Vogel for KHN)

This story also ran on Vice.
This story can be republished for free (details).