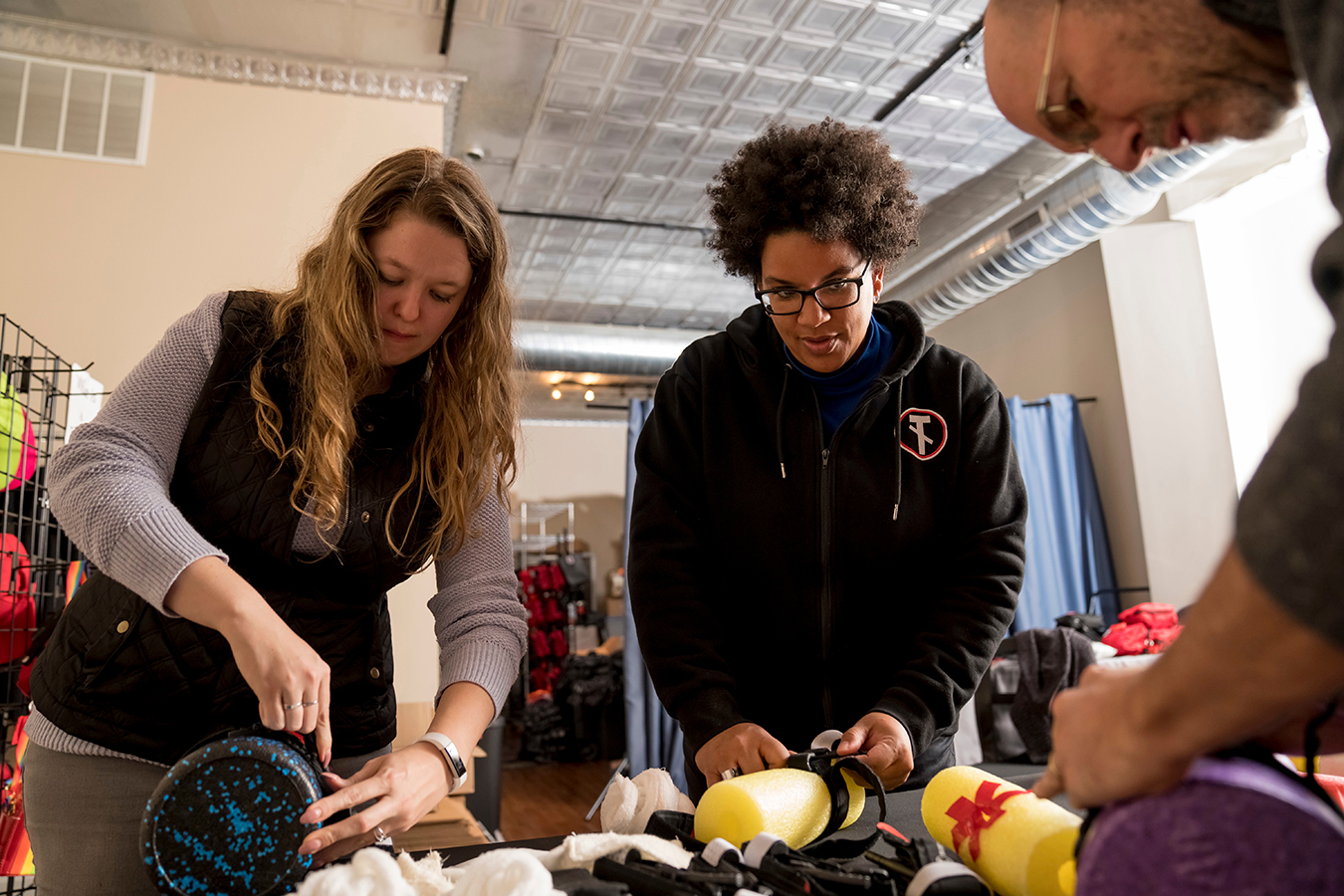 Dr. Laurie Punch (center), a trauma surgeon at Barnes-Jewish Hospital, shows Melissa Woeppel (left) and Stan Schloesser how to apply a tourniquet during a Stop the Bleed class last month in St. Louis.(Whitney Curtis for KHN)

This story also ran on NPR.
This story can be republished for free (details).

ST. LOUIS — Dr. Laurie Punch plunged her gloved hands into Sidney Taylor’s open chest in a hospital’s operating room here, pushing on his heart to make it pump again after a bullet had torn through his flesh, collarbone and lung. His pulse had faded to nothing. She needed to get his heart beating.

She couldn’t let the bullet win.

Bullets are Punch’s enemy. They threaten everything the 44-year-old trauma surgeon cherishes: her patients’ lives, her community, even her family. So, just as she recalled doing two years ago with Taylor, Punch has made it her life’s mission to stem the bleeding and the damage bullets cause — and excise them if she can.

In the operating rooms at Barnes-Jewish Hospital, Punch treats gunshot victims, removing bullets that studies show can poison bodies with lead and fuel depression. And in her violence-racked community, she teaches people how to use tourniquets to stop bleeding, creating a legion of helpers while building trust between doctors and community members.

Punch feels a calling to St. Louis, a place with the nation’s highest murder rate among big cities, where at least a dozen children were shot to death this summer alone, including a 7-year-old boy playing in his backyard. Punch believes all she’s learned has prepared her for now, when gun violence kills an average of 100 Americans a day and mass shootings are so common that two this summer struck less than 24 hours apart.

To her, the battle is personal, in more ways than one. 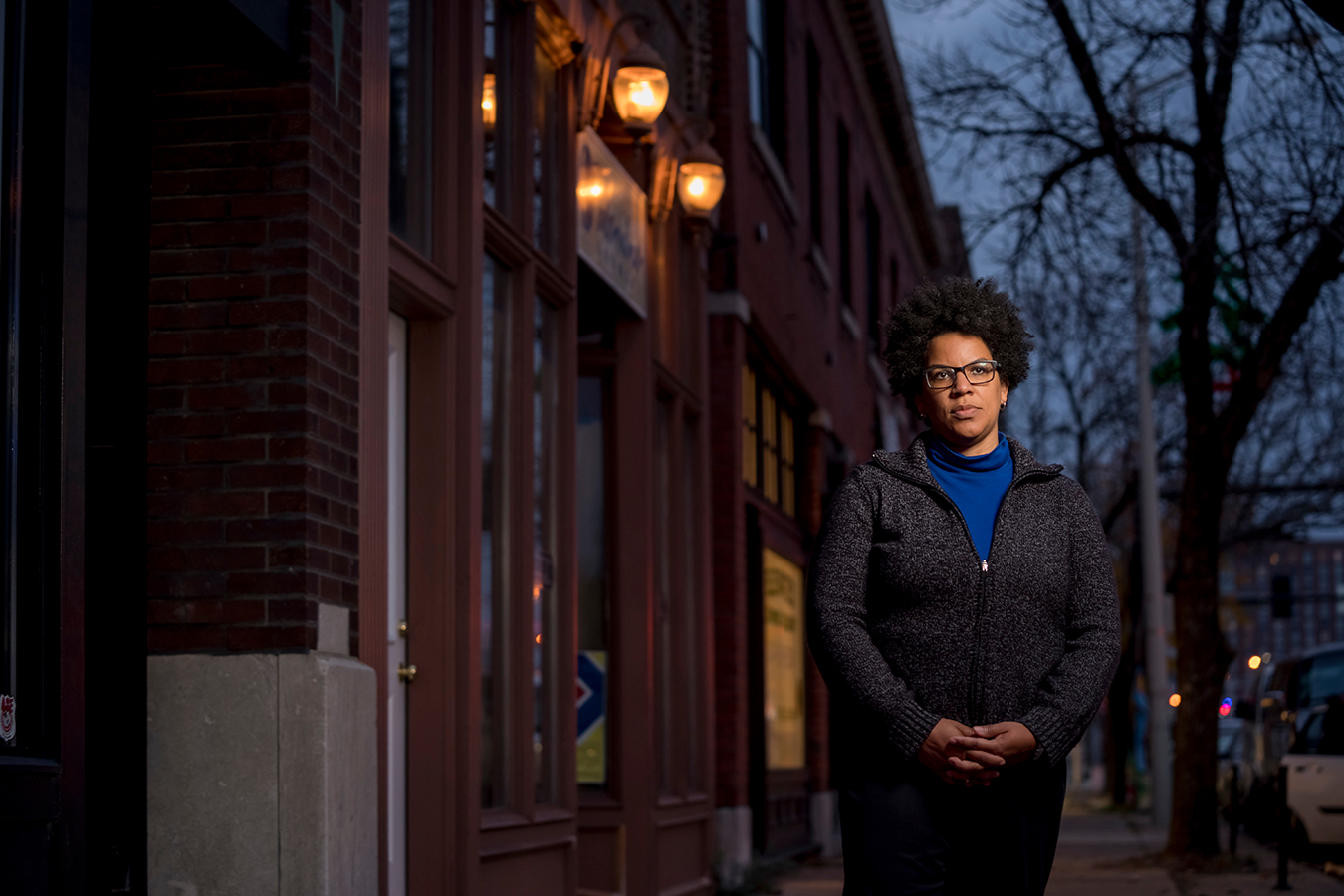 Dr. Laurie Punch, a trauma surgeon at Barnes-Jewish Hospital in St. Louis, is adamant that violence is a true medical problem doctors must treat in both the operating room and the community.(Whitney Curtis for KHN)

Besides being a surgeon, she’s a multiracial single mom living in Ferguson, Mo., just over a mile from where Michael Brown Jr., a black teenager, was shot and killed by a white police officer five years ago.

She has a son the same age as the little boy killed in the backyard in August. And she said, “I hear the gunshots echoing through my 2-acre backyard all the time.”

In September, Punch brought her message to Washington, D.C., testifying before the House Ways and Means Oversight subcommittee on gun violence. Wearing a jacket and tie, she faced lawmakers to share the story of Shannon Hibler.

The 23-year-old was brought to Punch’s hospital last summer, shot seven times. While the nurses gave him blood, Punch said, she cut open his chest, trying to force life back into his body — to no avail.

“I watched his wife sink, as the floodwaters of vulnerability and risk came into her eyes, thinking about the life of her and her child and how they would live without him,” Punch told the assembled lawmakers. “I watched his father rage. And I heard his mother wail.” 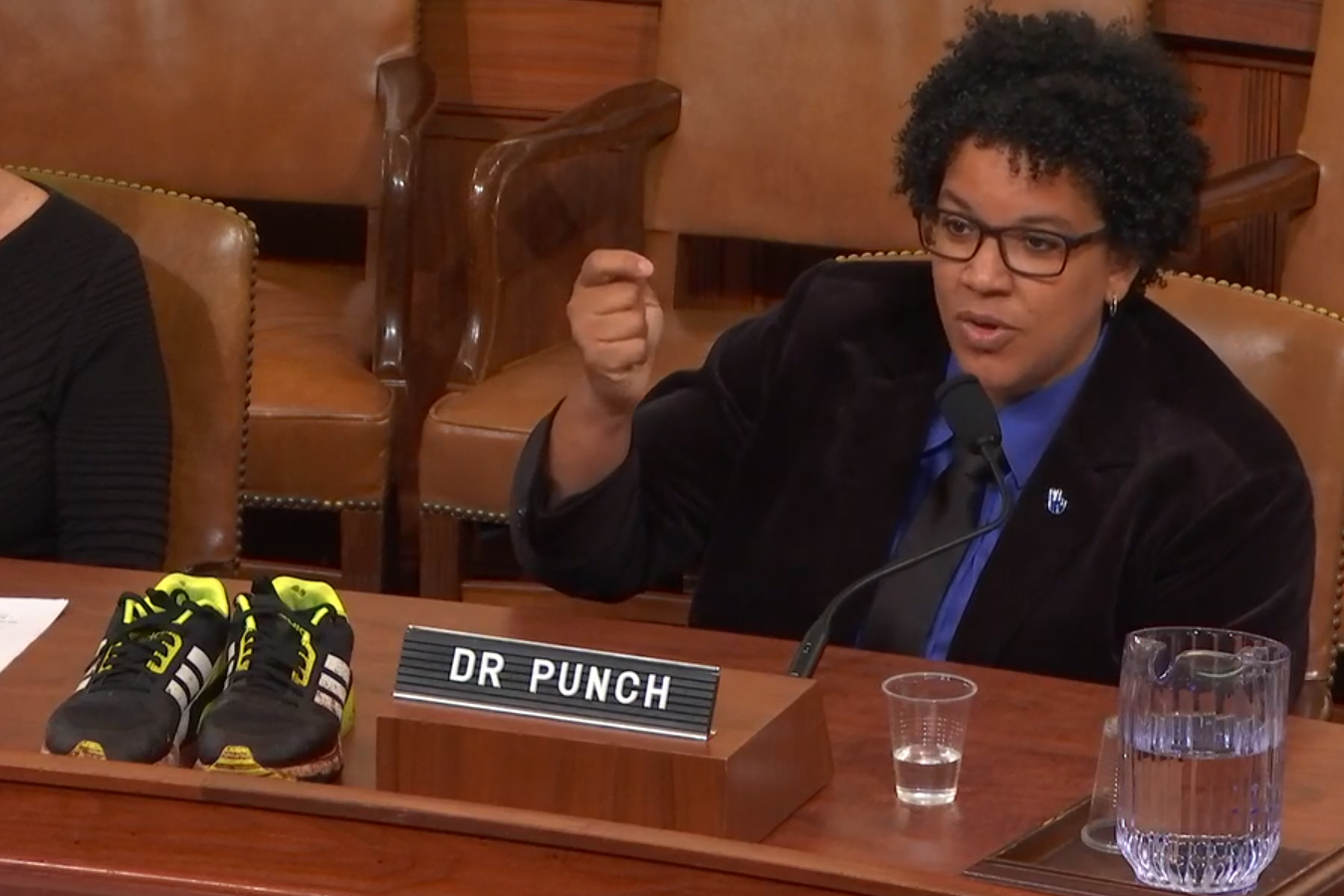 Punch placed the black-and-yellow, blood-splattered Adidas sneakers she’d worn the day of the shooting on the table before her in the hearing room.

“I can’t wash these stains out,” she told lawmakers.

The trauma surgeon was adamant: Violence is a true medical problem doctors must treat in both the operating room and the community. Until they do that, she said, violence victims will continue to be vectors who spread violence.

“The disease that bullets bring does not yet have a name,” she told Congress that day. “It’s like an infection, because it affects more than just the flesh it pierces. It infects the entire family, the entire community. Even our country.”

But healing also can be contagious — spreading among victims, families and the physicians themselves.

Punch, who regularly visits the neighborhoods where her patients live, attended an event last year for Saint Louis Story Stitchers, an artist and youth collective working to prevent gun violence. She remembers spotting a volunteer she knew — Antwan Pope, who’d been shot some years earlier but had found renewed purpose helping young people. 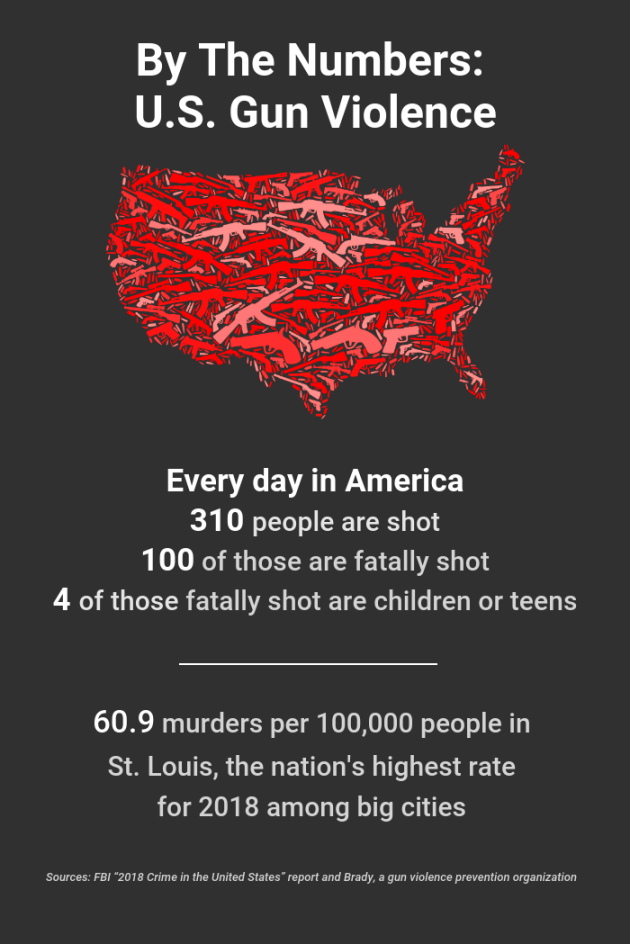 Punch told Pope about Hibler’s case, and learned Hibler was Pope’s cousin. Hibler’s dad was at the community event, too, and he handed Punch a lapel pin with his son’s picture.

She wore it on her white coat for months.

Punch was born in Washington, D.C., the only child of a Trinidadian father and white Midwestern mother. They separated six months after her birth.

Until she was 7, Punch moved every year with her mom. They eventually settled with Punch’s grandmother in the tiny town of Wellsville, Ohio, a close-knit but segregated community.

Classmates bullied her for being different, Punch recalls.

“I was different in every way because I wasn’t black; I wasn’t white,” said Punch, who later came out as gay.

From the time Punch was 9, she took $2 piano lessons from Elizabeth Carter. The local music teacher had transformed former drug dens into places with music lessons, free clothes and meals, and put all the kids who sought her help to work. Punch’s assignment was serving food.

“You show someone that they can help,” Punch said, “it’s revolutionary.”

That lesson guided her life as a child and when Punch moved on to Yale University, the University of Connecticut’s medical school and then the University of Maryland Medical Center in Baltimore, where poverty and trauma scarred many of her patients’ lives. 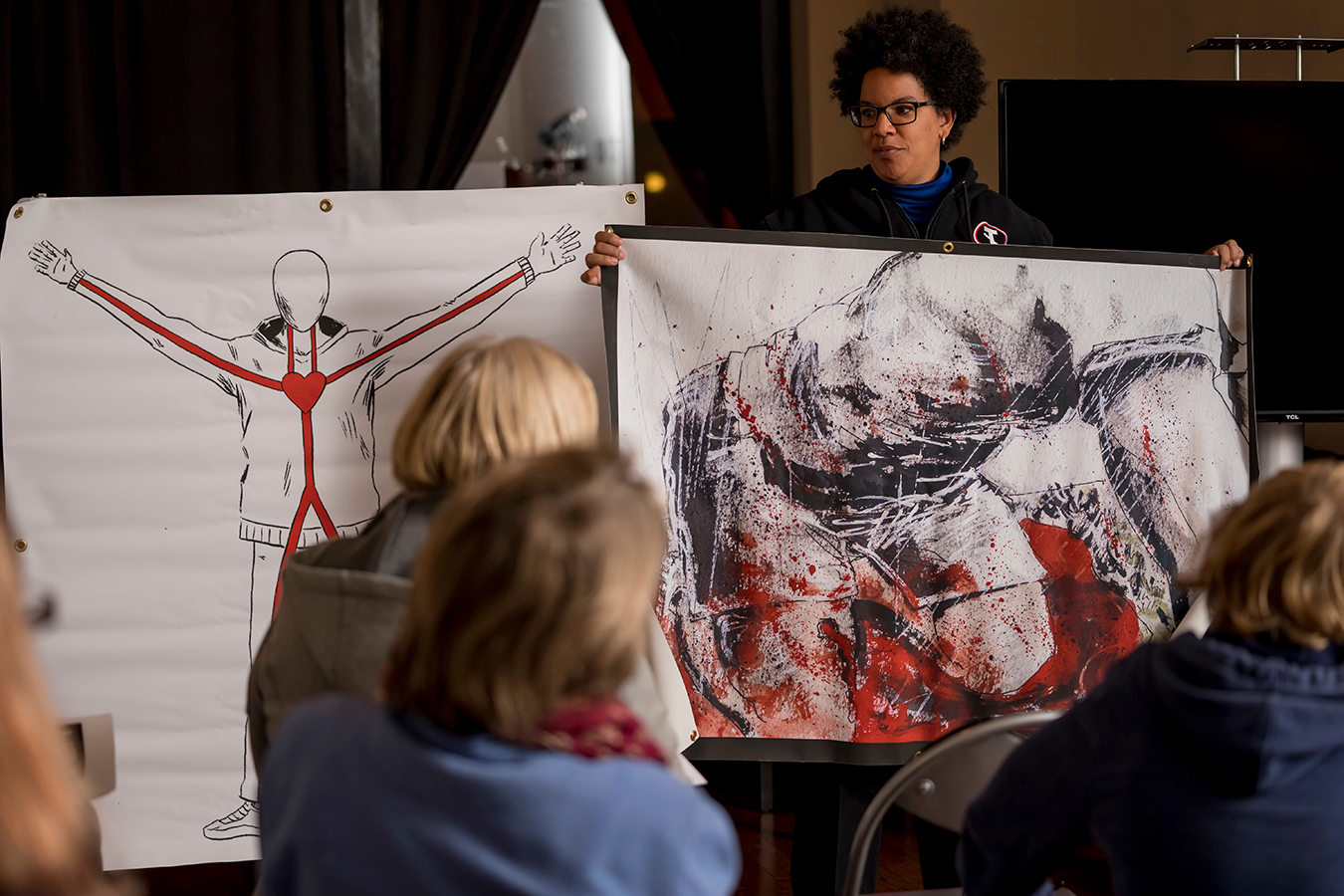 Participants listen to Dr. Laurie Punch, a trauma surgeon at Barnes-Jewish Hospital, as she teaches a Stop the Bleed class last month in St. Louis. “It’s far more than teaching people what to do,” Punch says. “They learn: ‘I am not simply a victim or a perpetrator or an observer; I’m a helper. I have the capacity to help.’”(Whitney Curtis for KHN)

Punch spent her early career in the shock trauma center in Baltimore, throwing everything she had into saving others.

After marrying a woman she met as a medical intern, Punch became pregnant with twins at 35.

The next few years were marked by highs and lows in her personal life and the unrelenting stress of dealing with the aftermath of violence at work.

She miscarried at five months. No one could tell her why.

Five months later, she became pregnant again, this time giving birth to a healthy boy, Sollal Braxton Punch. But not long later, she and her wife separated. Now she found herself as a single parent as the pressures of her job mounted.

One morning, three shooting victims arrived at the trauma center, quickly followed by a car crash victim who was pregnant. Punch’s nanny texted her, saying Sollal had a fever of 102.3.

The Call Of Community

So, she took a break from trauma for more than two years, focusing on general surgery at Houston Methodist Hospital in Texas.

But in 2015, a former colleague contacted her about a job as a trauma surgeon and educator at Washington University in St. Louis.

She feared going back to another troubled city. Michael Brown Jr. had been killed in Ferguson, Mo., a little more than a year earlier, triggering unrest and riots in that city just outside St. Louis.

Despite the area’s well-known history of violence, she flew to St. Louis for interviews, then rode around Ferguson with Dr. Isaiah Turnbull, an assistant professor. He pointed out the spot on Canfield Drive where Brown’s body had lain in the road for more than four hours.

“It was almost like seeing Ground Zero,” Punch said. “This is where it all went down. And it went down because of deep structural realities that caused the experience of black and brown people in north St. Louis to be fundamentally different. I went from not wanting to go to wanting to be right in the middle of it.”

And now she is. 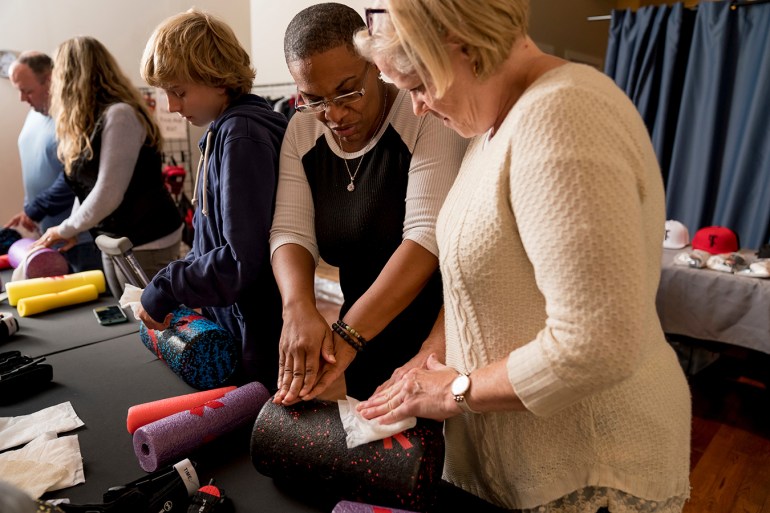 Project manager Erica Jones (center) shows Tracy Russo (right) how to pack a wound during Dr. Laurie Punch’s Stop the Bleed class last month in St. Louis. The program helps educate the public on how to care for a gunshot victim immediately following the trauma.(Whitney Curtis for KHN) 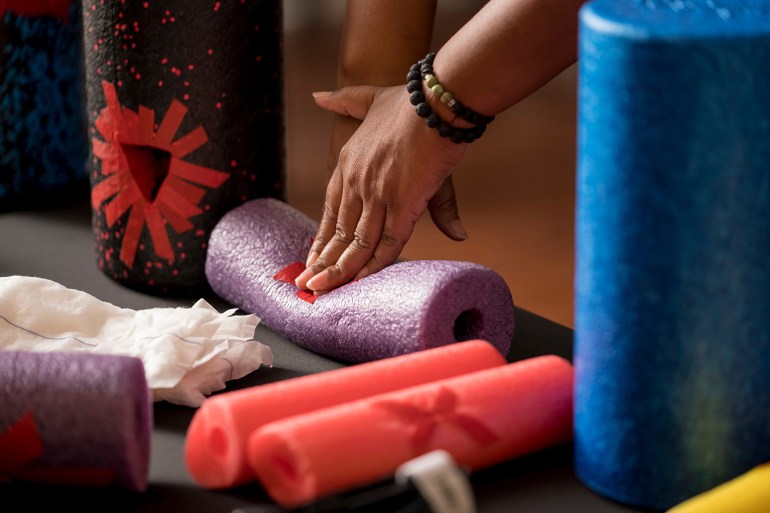 On a recent hot summer evening, 20 people — some black, some white — gathered around Punch. A few feet away, a doctor, a trauma nurse and a medical student stood near tables stacked with “pool noodles,” the long foam cylinders kids play with in swimming pools — these happened to be about the width of a human arm.

Punch told the class that a person can bleed to death in a minute, but an ambulance can take 15 minutes to arrive.

“If you can stop the bleed, you can save a life,” she said. “Time is life and minutes matter.”

Participants practiced packing wounds by pressing gauze into holes in the pool noodles. They tightened tourniquets — first on the foam cylinders, then on each other.

Punch knows one of the doctors who created the “Stop the Bleed” training sessions after the mass shooting at Sandy Hook Elementary School in Connecticut. She realized the same training could save lives after street shootings, too.

Since March 2018, she and her team have trained more than 7,000 community members in the St. Louis metropolitan area. Many come to a rented space she dubbed “The T,” for trauma, tourniquet and time. But Punch’s team has also held classes in schools, a juvenile detention center and a firing range.

“It’s far more than teaching people what to do,” Punch said. “They learn: ‘I am not simply a victim or a perpetrator or an observer; I’m a helper. I have the capacity to help.’” 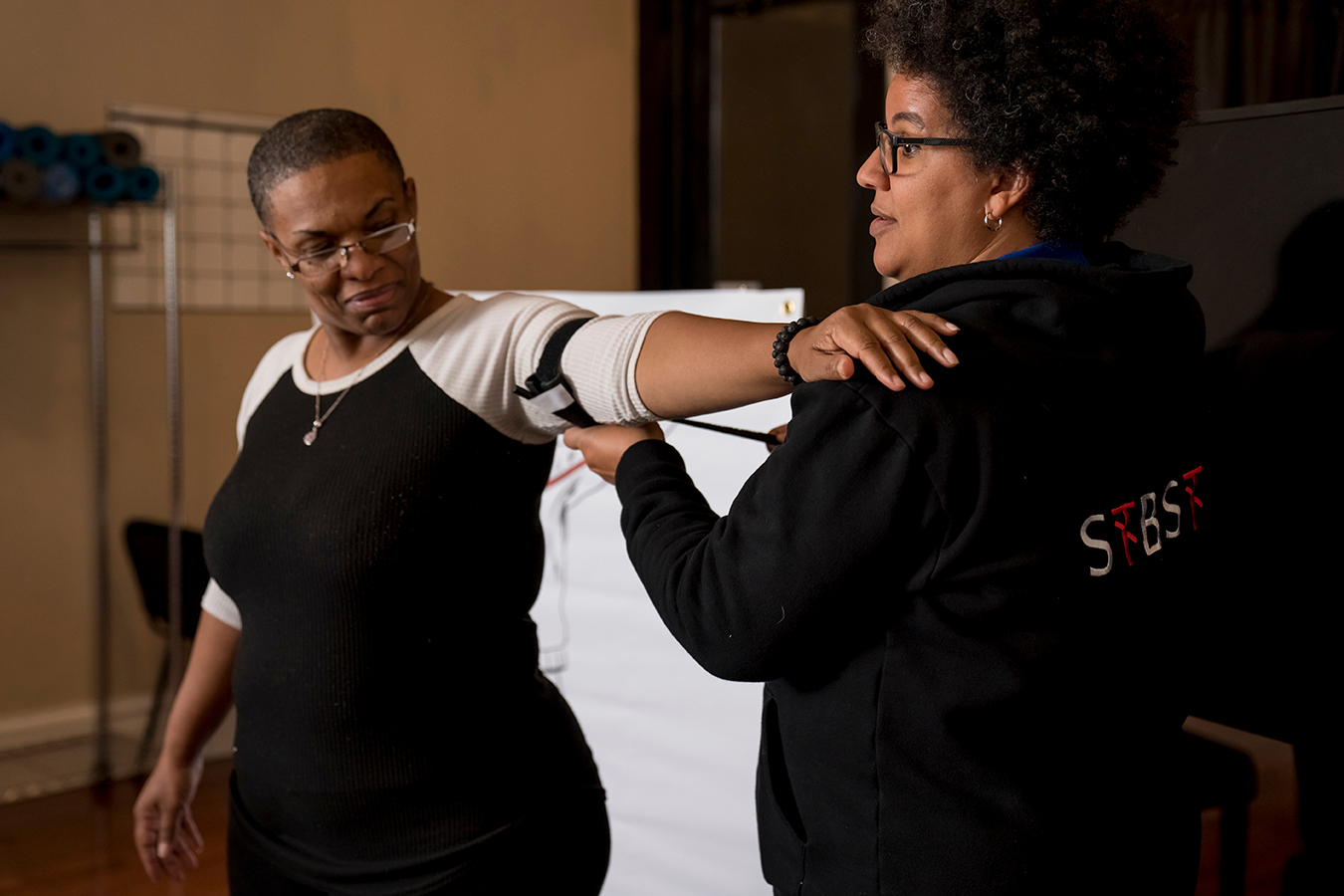 Dr. Laurie Punch (right) and project manager Erica Jones demonstrate how to apply a tourniquet during a Stop the Bleed class in St. Louis.(Whitney Curtis for KHN)

Two years ago, Sidney Taylor was shot outside his brother’s comedy club in north St. Louis County while trying to help a friend who was drunk. When Taylor arrived at Punch’s hospital, profuse bleeding had left his blood pressure dangerously low.

At one point, the father of four technically died on the operating table, but Punch and her team pulled him back.

After 10 days in intensive care, the longtime wrestling coach was still in physical and mental agony.

That’s the point when many patients slip back to their communities unhealed. But Taylor, now 47, showed up in Punch’s clinic a month after he had been shot, and they bonded during a 25-minute visit. Punch described to him how her team had removed part of his lung and inserted a breathing tube.

Punch mulled a thought, then asked. “Would you ever want to share your story?”

Punch recruited his hospital caregivers to create a video of their memories of saving him. When the taping finished, Taylor hugged each one.

Punch uses the video during talks, sometimes inviting Taylor to join her. Giving back to the community in that way has saved him a second time, he said.

After getting shot, “I could’ve basically turned to the dark side and done straight revenge,” Taylor said. “But I didn’t because of her.” 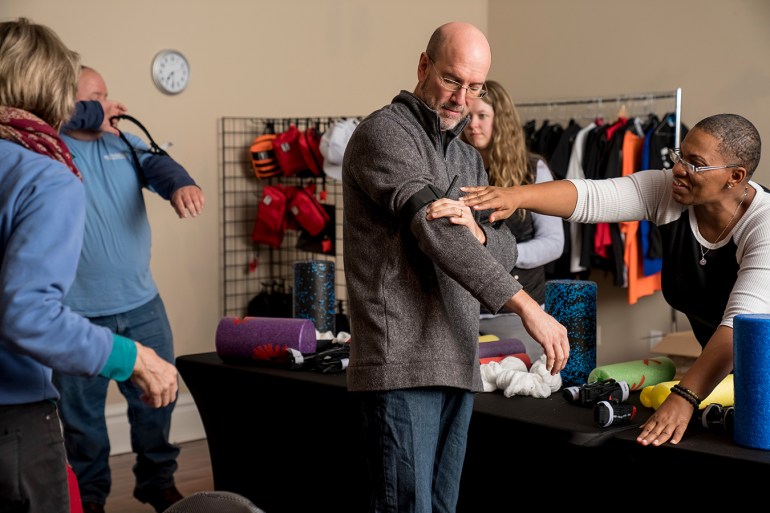 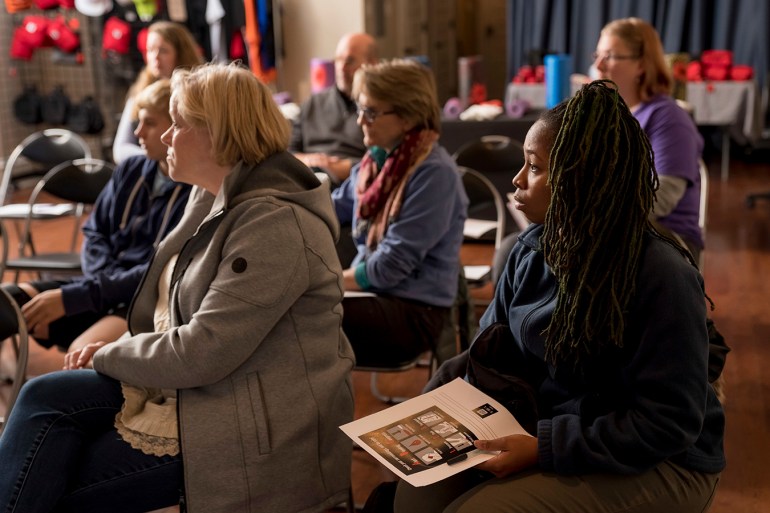