Long-term exposure to airborne fine particulate matter (PM2.5) and ozone was associated with an increased risk of death among Medicare beneficiaries, even for exposures below National Ambient Air Quality Standards, reported researchers.

This is a preview of Study: Even Low-Level Air Pollution Kills the Elderly. Read the full post (762 words, estimated 3:03 mins reading time)

Despite mounting concerns that opioids are being overprescribed, their use among older patients with rheumatoid arthritis (RA) — although slightly declining — remains substantial, investigators have determined.

This is a preview of Chronic Opioid Use ‘Substantial’ in Older RA Patients. Read the full post (789 words, estimated 3:09 mins reading time)

If 22 million Americans lose their health care coverage by 2026 under the GOP Senate’s plan to repeal and replace the Affordable Care Act, how many people could die? The question is at the heart of the debate raging in Washington, D.C., but has been difficult to answer.

“Show me the data on lives saved by Obamacare, please,” conservative political scientist Charles Murray requested in a recent tweet.

A pilot study published Wednesday in the Journal of the American Heart Association may provide an answer: Researchers found that the rate of sudden cardiac arrest outside of a hospital dropped by 17 percent among people ages 45-64 in Multnomah County, Ore., after the Affordable Care Act expanded insurance coverage.

This is a preview of Drop In Sudden Cardiac Arrests Linked To Obamacare. Read the full post (779 words, 1 image, estimated 3:07 mins reading time)

California risks losing $114.6 billion in federal funds within a decade for its Medicaid program under the Senate health care bill, a decline that would require the state to completely dismantle and rebuild the public insurance program that now serves one-third of the state, health leaders said Wednesday.

The reductions in the nation’s largest Medicaid program would start at $3 billion in 2020 and would escalate to $30.3 billion annually by 2027, according to an analysis released by the state departments of finance and health care services. 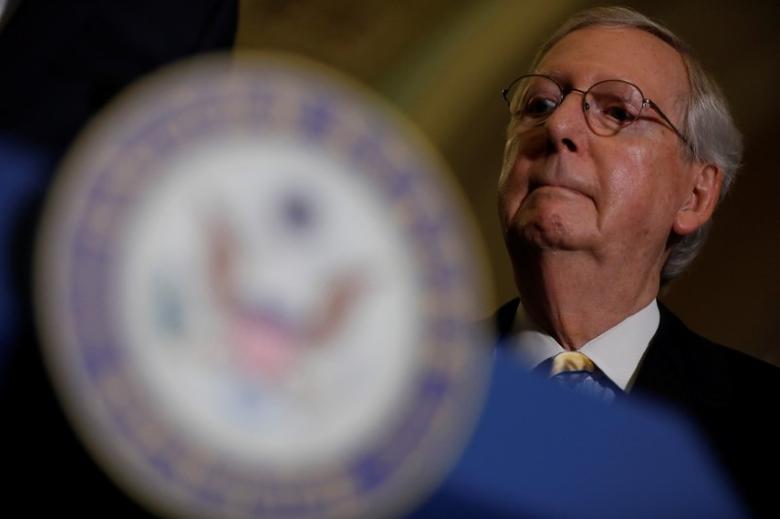 Senate Majority Leader Mitch McConnell speaks to the media about plans to repeal and replace Obamacare on Capitol Hill in Washington, U.S., June 27, 2017.

Vectura Group Plc said on Wednesday it has signed an exclusive deal with Sandoz AG, a unit of Swiss drugmaker Novartis, to develop a generic copy of an existing combined lung therapy for the U.S. market.

British drugmaker Vectura has been trying to build a specialized lung drug business since it merged with Skypeharma last year and said it would prioritize three to five generic projects each year.

However, the firm hasn’t had it easy, following delays in its generic drug with Hikma coming onto the market, a royalties row with GSK, and delays in Novartis launching its Ultibro inhaler in the U.S.

Senate Majority Leader Mitch McConnell is well aware of the political peril of taking health benefits away from millions of voters. He also knows the danger of reneging on the pledge that helped make him the majority leader: to repeal Obamacare.

Caught between those competing realities, McConnell’s bill offers a solution: go ahead and repeal Obamacare, but hide the pain for as long as possible. Some of the messaging on the bill seems nonsensical (see: the contention that $772 billion squeezed out of Medicaid isn’t a cut). But McConnell’s timetable makes perfect sense — if you are looking at the electoral calendar.

This is a preview of Analysis: Mitch McConnell Plans To Hide Trumpcare’s Pain Until After Midterms. Read the full post (1179 words, estimated 4:43 mins reading time)

Last week, a jury awarded a Pennsylvania man $620,000 for pain and suffering in a medical malpractice lawsuit he filed against a surgeon who mistakenly removed his healthy testicle, leaving the painful, atrophied one intact.

However, if a bill before the House of Representatives passes, the maximum he would be able to receive for such “non-economic” damages would be $250,000.

Non-economic damages cover losses that are hard to put a dollar amount on such as suffering, loss of a limb, pain, and loss of companionship. In addition, medical malpractice awards may include monetary damages to cover medical costs and loss of future wages. Sometimes punitive damages may be awarded as well as punishment for reckless or other harmful behavior.

This is a preview of House Seeks To Cap Malpractice Awards As Part Of Health Care Update. Read the full post (977 words, 1 image, estimated 3:54 mins reading time)
By Karl Plume

Glyphosate, an herbicide and the active ingredient in Monsanto Co’s popular Roundup weed killer, will be added to California’s list of chemicals known to cause cancer effective July 7, the state’s Office of Environmental Health Hazard Assessment (OEHHA) said on Monday.

Monsanto vowed to continue its legal fight against the designation, required under a state law known as Proposition 65, and called the decision “unwarranted on the basis of science and the law.”

This is a preview of California to list herbicide as cancer-causing; Monsanto vows fight. Read the full post (459 words, estimated 1:50 mins reading time)
By Susan Cornwell and Richard Cowan
| WASHINGTON

Facing a potentially disastrous defeat by members of his own party, U.S. Senate Majority Leader Mitch McConnell decided on Tuesday to delay a vote on healthcare legislation in order to get more support from Republican senators.

President Donald Trump summoned all 52 Republican senators to the White House on Tuesday afternoon to discuss how to proceed.

McConnell had been pushing for a vote ahead of the July 4 recess that starts at the end of the week. The legislation would advance a repeal of major elements of Obamacare and replace it with a new federal healthcare program.