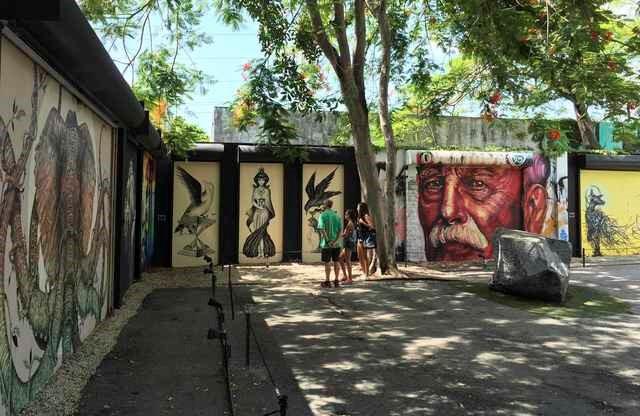 Christophe and Franziska Lefever were admiring graffiti at an outdoor gallery in a chic Miami arts district on Friday when they learned that the first cases of Zika spread by mosquitoes in the continental United States were contracted in the area.

“We’re covered in bug bites already,” said Christophe Lefever, 26, weighing his and his wife’s odds of getting infected with a virus tied to a rare but serious birth defect.

The couple from Austria decided it was probably safe to continue enjoying their vacation, even though Florida authorities now consider it probable that the virus has been transmitted by mosquito bites in the area.

Officials believe any spread would be limited to an area of about a square mile (2.6 square kms) north of downtown Miami.

The neighborhoods targeted for increased surveillance and mosquito control include the trendy Wynwood district, which has rapidly gentrified in recent years and now boasts art galleries, luxury retailers and colorful murals on its walls.

Tourists, students and longtime residents were concerned about the news of Zika’s arrival, but few stayed indoors. While some shopped and snapped selfies like normal, one hotdog vendor sought to protect himself by adding a mosquito repellant unit to his cart.

Like U.S. health officials, many here viewed the arrival of Zika in Miami as all but inevitable, given the region’s large numbers of tourists and its sweaty summer mosquito season.

“It was obvious this is where it was going to come in,” said Bradley Kilgore, a chef and partner at Alter, a local restaurant. He said he planned to research bug repellants.

The U.S. Centers for Disease Control and Prevention said it was not advising against travel to the region, as it has recommended for pregnant women to countries seeing widespread outbreaks.

Infection during pregnancy is considered the greatest risk from the current Zika outbreak, which has spread rapidly through the Americas since it was first detected in Brazil last year. The virus can cause microcephaly in babies, a condition defined by small head size that can lead to developmental problems.

“We are scared,” said Lucile Simon, 21, who is from Normandy, France and studying for the summer in Miami.

“But what can we do?” she added, noting that violence inspired by extremist groups is also a danger worldwide. “We won’t let it deter us from traveling.”