Four people in Miami likely contracted Zika locally through mosquito bites, Florida’s governor said on Friday, the first evidence that the virus tied to a rare but serious birth defect is circulating in the continental United States.

Governor Rick Scott said the state believed active transmission of the virus was occurring within an area of Miami about the size of a square mile (2.6 square kms). Testing showed that one woman and three men had been infected, Scott said.

While health officials have yet to identify mosquitoes carrying the virus, the state has ruled out other means of transmission, including travel to another country with a Zika outbreak, and sexual contact.

Zika’s greatest risk is believed to be posed by infection in pregnant women, given its ability to cause microcephaly in babies, a condition defined by small head size that can lead to developmental problems.

Florida Surgeon General Celeste Philip said that health officials are not advising pregnant women in the transmission area to move.

“We do not believe there will be ongoing transmission,” Philip said at a press conference in Orlando, citing daily efforts to control the mosquito population in the area.

U.S. health officials have cautioned for months that the summer mosquito season was likely to bring local outbreaks, with Gulf Coast states such as Florida, Texas and Louisiana, on the frontlines.

The current Zika outbreak was first detected in Brazil last year, triggering global alarm over the discovery that it was linked to microcephaly in infants and other severe neurological abnormalities. Brazil has confirmed over 1,600 cases of microcephaly linked to Zika infection in pregnant women.

Public health officials say Zika is also a likely cause of Guillain-Barre syndrome, a rare neurological disorder in adults that can cause temporary paralysis.

Zika’s arrival in the United States comes with Congress in recess after failing to reach agreement over how much funding could be used to fight an outbreak. The Obama administration has requested $1.9 billion to finance research, mosquito control and other prevention efforts.

Until now, the more than 1,600 Zika cases in the United States have stemmed from travel to another country with active transmission, as well as a small number of cases of apparent sexual transmission by a person infected outside of the country.

Puerto Rico has already been grappling with a Zika outbreak, with more than 4,600 cases of local transmission. U.S. health officials have predicted there will be hundreds of thousands of cases on the island territory before the current outbreak ends due to the prevalence of Zika-carrying mosquitoes and a lack of infrastructure to protect against insect bites. 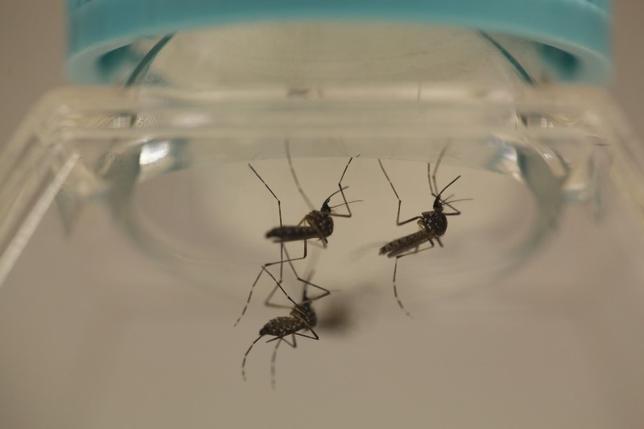 Aedes aegypti mosquitoes are seen at the Laboratory of Entomology and Ecology of the Dengue Branch of the U.S. Centers for Disease Control and Prevention in San Juan, March 6, 2016.