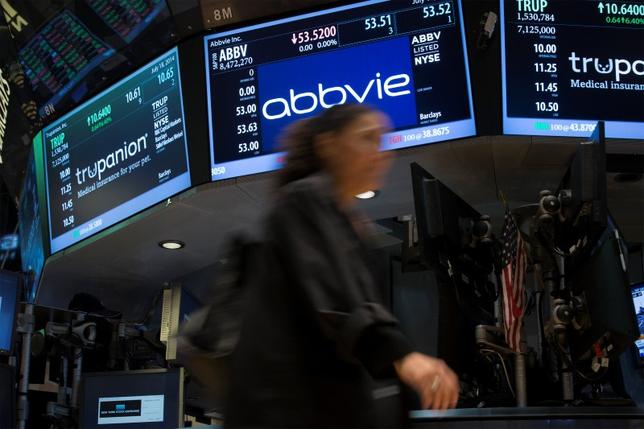 A screen displays the share price for pharmaceutical maker AbbVie on the floor of the New York Stock Exchange July 18, 2014.

An experimental once-daily combination hepatitis C treatment being developed by AbbVie Inc demonstrated very high cure rates across a wide range of disease genotypes, according to data presented on Saturday, likely giving the company a more competitive product if approved.

Cure rates of 97 percent to 100 percent over either eight or 12 weeks of treatment were achieved in the clinical trials with the one pill, once-a-day combination of ABT-493 and ABT-530, which use different methods to block virus replication.

The combination would provide greater convenience for a wider variety of patients than AbbVie’s Viekira Pak, improving chances of making inroads into the market domination currently enjoyed by Gilead Sciences Inc.

Viekira Pak, which is approved for genotype 1, the most common form of the serious liver disease in the United States, consists of four drugs and involves taking three pills in the morning and one in the evening. It currently has only about 5 percent of the market, with Gilead owning about 90 percent.

Another AbbVie product treats genotype 4, which is most common in Egypt and other parts of Africa.

The new one pill combination proved effective across the spectrum of genotypes 1-6 in the midstage studies presented at a European liver disease meeting in Barcelona.

Patients with genotype 3 and no cirrhosis receiving treatment for the first time had a 97 percent cure rate with eight weeks of therapy.

Cure rates of 100 percent were achieved with 12 weeks of treatment in genotype 3 patients with cirrhosis, and in non-cirrhotic patients with genotypes 4, 5 and 6.

“These new data show us the potential of ABT-493 and ABT-530 in genotype 3 patients new to therapy even with the added complication of compensated cirrhosis,” Dr. Paul Kwo, one of the lead investigators and professor of medicine at the Indiana University School of Medicine, said in a statement.

Cirrhosis, a form or severe scarring, is an indication of advanced disease that can lead to diminished liver function or liver failure.

The most common side effects were fatigue, headache, nausea and diarrhea, the company reported.