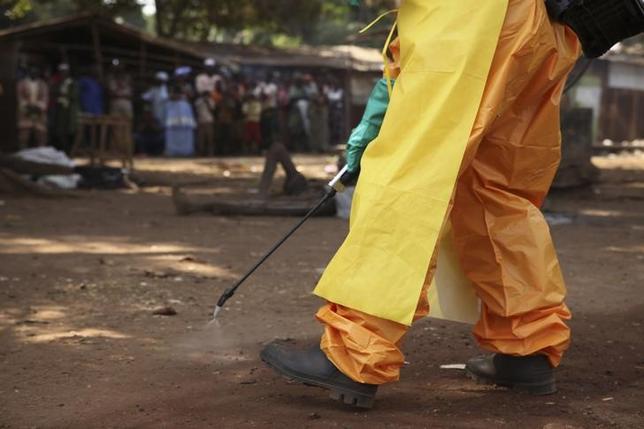 A member of the French Red Cross disinfects the area around a motionless person suspected of carrying the Ebola virus as a crowd gathers in Forecariah January 30, 2015.

The world is on the verge of being able to protect humans against Ebola, the World Health Organization said on Friday, as a trial in Guinea found a vaccine to have been 100 percent effective.

Initial results from the trial, which tested Merck (MRK.N) and NewLink Genetics’ (NLNK.O) VSV-ZEBOV vaccine on some 4,000 people who had been in close contact with a confirmed Ebola case, showed complete protection after 10 days.

The results were described as “remarkable” and “game changing” by global health specialists.

“We believe that the world is on the verge of an efficacious Ebola vaccine,” WHO vaccine expert Marie Paule Kieny told reporters in a briefing from Geneva.

The vaccine could now be used to help end the worst recorded outbreak of Ebola, which has killed more than 11,200 people in West Africa since it began in December 2013.

WHO Director-General Margaret Chan said the results, published online in the medical journal The Lancet, would “change the management of the current Ebola outbreak and future outbreaks”.

The Gavi Alliance, which buys vaccines in bulk for poor countries who struggle to afford them, immediately said it would back an Ebola shot once it is approved.

“These communities need an effective vaccine sooner rather than later,” Gavi’s chief executive Seth Berkley said. “We need to be ready to act wherever the virus is a threat.”

This and other vaccine trials were fast-tracked with huge international effort as researchers raced to test potential therapies and vaccines while the virus was still circulating.

“It was a race against time and the trial had to be implemented under the most challenging circumstances,” said John-Arne Røttingen of Norway’s Institute of Public Health, chair of the trial’s steering group.

The Guinea trial began on March 23 to evaluate the effectiveness and safety of a single dose of VSV-ZEBOV using a so-called “ring vaccination” strategy, where close contacts of a person diagnosed with Ebola are immunized – either immediately, or at a later date.

As data began to emerge showing the very high protection rates in those vaccinated immediately, however, researchers decided on July 26 that they would no longer use the “delayed” strategy, since it was becoming clear that making people wait involved unethical and unnecessary risk.

The trial is now being continued, with all participants receiving the vaccine immediately, and will be extended to include 13- to 17-year-olds and possibly also 6- to 12-year-old children, the WHO said.

Jeremy Farrar, a leading infectious disease specialist and director of the Wellcome Trust, said the trial “dared to use a highly innovative and pragmatic design, which allowed the team in Guinea to assess this vaccine in the middle of an epidemic”.

“Our hope is that this vaccine will now help bring this epidemic to an end and be available for the inevitable future Ebola epidemics,” his statement said.

The medical charity Doctors without Borders (MSF), which has led the fight against Ebola in West Africa, called for VSV-ZEBOV to be rolled out to the other centers of the outbreak, Liberia and Sierra Leone, where it says it could break chains of transmission and protect front-line health workers.

VSV-ZEBOV was originally developed by Canada’s public health agency before being licensed to NewLink Genetics, which then signed a deal handing Merck the responsibility to research, develop, manufacture and distribute it.

The success of the Guinea trial is a big relief for researchers, many of whom feared a sharp decline in cases this year would scupper their hopes of proving a vaccine could work.

Another major trial in Liberia, which had aimed to recruit some 28,000 subjects, had to stop enrolling after only reaching its mid-stage target of 1,500 participants. Plans for testing in Sierra Leone were also scaled back. That left the study in Guinea, where Ebola is still infecting new victims, as the only real hope for demonstrating the efficacy of a vaccine.

(Additional reporting by Tom Miles in Geneva and Ben Hirschler in London; Editing by Kevin Liffey)