Two more cases of Ebola have been confirmed in Liberia following the death of a teenager from the virus on Sunday, officials say.

The country had been declared Ebola-free more than seven weeks ago.

Both of the new cases were in Nedowein, the same village where the boy died, the ministry of information says.

Liberia’s authorities quarantined the area after the teenager’s death and said his funeral was carried out safely.

Health official Cestus Tarpeh told AFP news agency that the pair had been in physical contact with the 17 year old before his death.

He added that a herbalist who had treated the boy had evaded the authorities and was on the run.

It is not clear how the teenager who died was infected.

People are infected when they have direct contact through broken skin, or the mouth and nose, with the blood, vomit, faeces or bodily fluids of someone with Ebola.

More than 11,000 people have died of the disease since December 2013, the vast majority of them in Liberia, Guinea and Sierra Leone.

(Reuters) – Liberia confirmed on Wednesday it had at least two cases of Ebola, nearly two months after the West African country worst hit by the disease had been declared free of it.

More than 11,200 people have died since last year in the worst ever outbreak of Ebola, nearly all of them in three neighboring countries, Liberia, Sierra Leone and Guinea.

Liberia was the worst-hit, with more than 4,800 people dying, but was declared Ebola-free by the World Health Organization on May 9 after 42 days passed with no new infections.

Neighboring Sierra Leone and Guinea are still suffering, with 20 new cases reported in the week to June 21 between them.

Liberian authorities were monitoring more than 100 people to contain a new outbreak after the body of 17-year-old Abraham Memaigar tested positive for the virus on Sunday in Margibi County, a rural area about 30 miles from the capital.

He was buried the same day but the news was announced only on Tuesday. A neighbor of the boy also later tested positive.

It was not clear how the teenager caught the virus.

At the village of Nedowein, Memaigar’s mud-brick home had been placed under quarantine. Health officials wearing rubber boots and gloves were going from house to house talking to residents who were confined to their homes.

A local doctor said officials had not ruled out the possibility of transmission from an animal. In past outbreaks, humans have been infected by eating monkey flesh.

There are currently no indications that the case was imported from a neighboring country and Margibi County is far from the epidemic’s remaining hotspots.

Health officials in Nedowein were working to identify the contacts of the boy, who had attended school and visited a local clinic in the week before his death.

Ebola, spread through bodily fluids, is most contagious in the late stages when victims can suffer bleeding from the eyes and ears as well as vomiting and diarrhea.

“Other people with symptoms who have been in contact with the boy are under investigation. Over 100 people are listed as contacts and all are being monitored closely,” said WHO spokeswoman Dr. Margaret Harris in an email to Reuters.

Liberia helped to control the epidemic with the help of U.S. military assistance and hundreds of millions of dollars in aid.

“We will remain engaged with governments in the region to ensure Ebola does not take hold again in the way it did last summer,” said U.S. Assistant Secretary of State for African Affairs Linda Thomas-Greenfield on Tuesday. 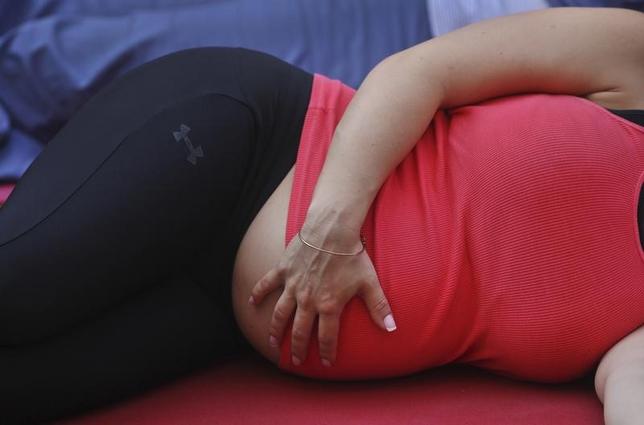 A pregnant woman touches her stomach as people practice yoga on the morning of the summer solstice in New York’s Times Square June 20, 2012.

(Reuters Health) – Roughly half of first-time mothers in the U.S. gain too much weight during pregnancy, about the same proportion who are overweight at the start, a study finds.

Researchers compared data on more than 2 million U.S. women to a group of about 1,650 of their peers in Germany, where almost three-fourths of first-time mothers started pregnancy at a healthy weight and only 27 percent exceeded weight gain recommendations.

“The differences in overweight rates pre-pregnancy and in weight gain are surprising,” lead study author Dr. Joachim Dudenhausen, an obstetrics researcher at Charite University Medicine in Berlin, said by email. “We must follow these data for some years to find an explanation.”

While the cause of the discrepancies is unclear, the health effects of excessive weight gain during pregnancy, or starting out overweight, are well known, he said.

Short-term problems can include overweight babies, births complicated by infants’ shoulders getting stuck on the way out, and a greater likelihood of a surgical delivery by cesarean section, he said. Over the long haul, babies can have a greater risk of diabetes, hypertension and metabolic syndrome, which increases the odds of heart attacks and strokes in adulthood.

Women who are underweight at the start of pregnancy should gain 28 to 40 pounds, while women who are normal weight are advised to gain 25 to 35 pounds, according to the U.S. Institute of Medicine. For overweight women, a 15- to 25-pound gain is recommended and obese women should gain just 11 to 20 pounds.

To see how often women were below, within or above recommended weight ranges for pregnancy, Dudenhausen and colleagues assessed weight gains for the German and American pregnancies based on their pre-pregnancy body mass index (BMI), a measure of weight relative to height.

An adult who is 5 feet 9 inches tall and weighs from 125 to 168 pounds would have a BMI of 18.5 to 24.9 and be considered a healthy weight, according to the U.S. Centers for Disease Control and Prevention. An obese adult at that height would have a BMI of 30 or more and weigh at least 203 pounds.

Pre-pregnancy, 72 percent of the German women were at a healthy weight, compared with just 47 percent for the Americans, the study found. Four percent of the women in the U.S. and in Germany were underweight.

In Germany, 39 percent of women gained too little during pregnancy, almost twice the rate in the U.S. And, overall, less than one in three American or German women stayed within the recommended weight gains during pregnancy.

The findings confirm that obesity is an epidemic, and that doctors need to counsel women on proper nutrition and exercise well before pregnancy to make it more likely that they start out at a healthy weight, the researchers write in American Journal of Obstetrics and Gynecology.

“Over the last two to three decades, there has been a significant increase in obesity among pregnant women in the U.S., and the proportion of overweight women in Germany is significantly less but also increasing,” said Dr. Amos Grunebaum, director of obstetrics at NYP/Weill Cornell Medical Center in New York.

Obesity increases the risk of infertility and miscarriages, Grunebaum, a co-author on the study, said by email.

“Obese women may have to make significant changes in their eating habits in order to improve chances of getting pregnant and having healthy babies,” he said.

Both spouses and first-degree relatives of patients with celiac disease are at increased risk of nonceliac autoimmune disease, according to a study in the July issue of Clinical Gastroenterology and Hepatology, the official clinical practice journal of the American Gastroenterological Association. This risk represents a mixture of genetic, environmental and ascertainment bias mechanisms.

“The prevalence of celiac disease in first-degree relatives of individuals with celiac is approximately 10 percent. Despite these findings, little is known about the risk of nonceliac autoimmune disease in these individuals,” said lead study author Louise Emilsson, MD, PhD, from Oslo University and Primary care research unit, Värmlands Nysäter. “We found convincing results that close relatives are also at risk for these conditions, but more surprisingly, we found that spouses may also be at risk.”

While the excess risk found in celiac first-degree relatives can be explained by genetics, the higher risk in spouses points to the impact of environmental factors. It is also possible that spouses share microbiome characteristics with their husband/wife, which might impact the risk of developing and diagnosing other autoimmune diseases.

Another explanation is ascertainment bias, meaning that first-degree relatives and spouses are likely to seek medical advice or undergo celiac disease testing more often than the general population. It could also mean that doctors who are aware of the celiac disease patient are more likely to investigate first-degree relatives and spouses for autoimmunity.

Celiac disease, which affects approximately 1 percent of the Western population, is an autoimmune disorder that causes your immune system to interfere with the proper function of the small intestine.