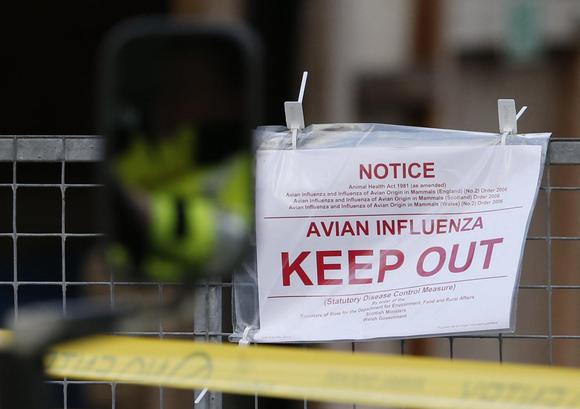 Police tape and warning signs are seen outside a duck farm in Nafferton, northern England November 17, 2014.

(Reuters) – A second Dutch farm was hit by an outbreak of bird flu, the government said on Thursday, prompting the destruction of 43,000 chickens and prolonging crippling restrictions on trade in the world’s leading egg exporter.

A three-day, nation-wide ban on the transportation of all poultry, eggs and related farm products was extended until Sunday, a statement said.

The measures have already led to tens of millions of euros (dollars) in losses. Industry groups had warned that an extension could bankrupt smaller producers.

Infections have also been discovered on farms in Germany and, this week, Britain.

The infection announced on Thursday was of the H5 strain, the government said, but it was unclear if it was the highly-contagious H5N8 virus discovered last week at a farm 20 km (12 miles) away.

Like in the previous outbreak, authorities imposed a 10 km exclusion zone around the farm in Ter Apel, in the central Netherlands, and were testing four nearby farms for the virus.

The first case in the Netherlands was reported last weekend in the village of Hekendorp, prompting the culling of 150,000 laying hens.

Authorities have yet to determine conclusively whether there is a link between the Dutch, German and British outbreaks, or whether they are related to infected birds in Asia.

Experts have said they suspect that all are connected and believe wild birds may have carried the disease to Europe and introduced it into commercial flocks.

The German and the first Dutch outbreak are of the H5N8 strain, which is highly contagious in birds. H5N8 has never been found in humans, unlike H5N1, which has killed 400 people mostly in Asia and the Middle East since 2003 and caused a global scare.

There can be no exports of poultry products as long as the transportation ban is in place, and the latest measures could lead to a supply shortage.

With a population of less than 17 million, the Netherlands is the world’s second largest exporter of agricultural products after the United States, selling $79 billion euros ($99 billion) of agricultural goods abroad last year.

Around 2,000 businesses, with more than 100 million chickens, export more than 6 billion eggs a year. The Netherlands is also the leading exporter of poultry meat in the European Union.