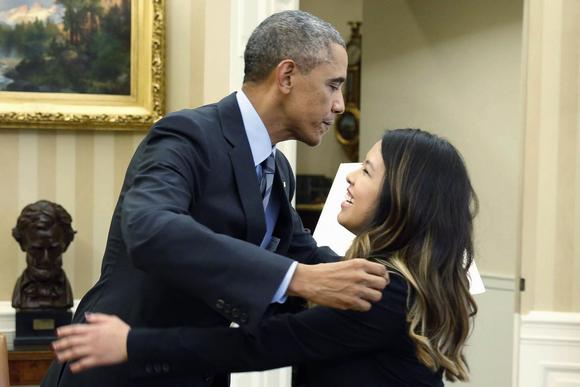 President Barack Obama leans over to hug Dallas nurse Nina Pham while meeting with her in the Oval Office in Washington, October 24, 2014.

(Reuters) – The first person quarantined under strict new rules in the New York City area for people with a high risk of Ebola tested negative, New Jersey officials said on Saturday, as President Barack Obama said the response to the deadly disease needed to be based on “facts, not fear”.

Under the new policy, anyone arriving at the two international airports serving New York City after having contact with Ebola patients in Liberia, Sierra Leone or Guinea must submit to a mandatory 21-day quarantine.

“We have been examining the protocols for protecting our brave healthcare workers, and, guided by the science, we’ll continue to work with state and local officials to take the necessary steps to ensure the safety and health of the American people,” Obama said.

The disease has killed thousands of people in West Africa and has become a political issue in the United States ahead of Nov. 4 congressional elections.

The new rules in New York and New Jersey were announced a day after an American doctor who recently helped Ebola patients in Guinea also tested positive for the virus at Manhattan’s Bellevue Hospital. The doctor, who was self-monitoring, started feeling symptoms about a week after he returned home.

The first person to face the mandatory quarantine under the new rules was a medical worker who arrived at Newark Liberty International Airport on Friday after treating Ebola victims in West Africa. She broke into a fever soon after being quarantined and was taken to University Hospital in Newark, New Jersey’s health department said.

Tests on the woman, who has not been publicly identified, showed no signs of the virus, the health department said on Saturday. Even so, she remains under the 21-day quarantine. She was described by friends as a nurse who went to Sierra Leone to help with the epidemic, the Newark Star-Ledger reported.

The worst Ebola outbreak since the disease was identified in 1976 has killed almost half of more than 10,000 people diagnosed with the disease — predominantly in Liberia, Sierra Leone and Guinea — although the true toll is far higher, according to the World Health Organization.

The United Nations agency also said on Friday that trials of Ebola vaccines could begin in West Africa in December, a month earlier than expected, and hundreds of thousands of doses should be available for use by the middle of next year.

Spencer was the fourth person diagnosed with the virus in the United States and the first in its largest city.

International and local officials in Guinea defended their screening systems on Saturday, which include temperature checks at the airport, and said Spencer was not ill when he left the country.

“The system at the airport here worked fine and he was not showing any symptoms,” Benjamin Dahl, the officer in charge of Guinea operations for the U.S. Centers for Disease Control and Prevention, said at a news conference in Conakry, the capital.

Cuomo’s announcement of the heightened screening appeared to mark a shift from the tone taken by New York City Mayor Bill de Blasio.

Cuomo, who is up for reelection on Nov. 4, had sat alongside de Blasio and city health officials on Thursday evening as they praised Spencer for diligently monitoring his health and dismissed the idea that New Yorkers could catch Ebola on the city’s subway, which Spencer had ridden since his return.

Less than a day later, in justifying the heightened screening, the Democrat appeared to criticize Spencer for venturing out and eating at city restaurants before his temperature started to rise.

The governor said Spencer’s behavior demonstrated that voluntary quarantines did not work. In fact, Spencer was never required to quarantine himself either under federal guidelines or those of Doctors Without Borders, which says quarantines are “unwarranted” for returning health workers who show no symptoms.

Cuomo and Christie said people facing mandatory quarantines could do so at home if they lived in New York or New Jersey, but other details were unclear, including what might happen to quarantined people who decided to venture outside.

The two governors’ offices and their health departments did not immediately respond to questions seeking more details.

Critics of the new measures say they worry that mandatory quarantines could discourage Americans from going to help control the epidemic in West Africa.

Representative Diana DeGette, a Colorado Democrat who was an early advocate of reassessing federal protocols on handling Ebola, warned against an over reaction by health authorities.

“It’s a very fine balance between getting our people to go over and help treat these Ebola patients – and they are very courageous to go on the front lines like that – and also make sure we protect public health,” DeGette said in an interview with CNN on Saturday morning.

The virus is not airborne but is spread through direct contact with bodily fluids from an infected person who is showing symptoms.