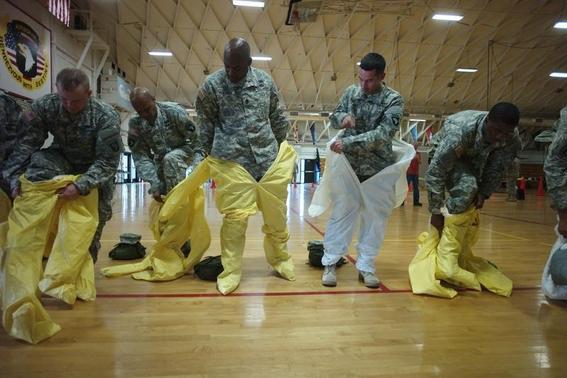 Hagel, acting at the recommendation of top military commanders, signed a memo asking for an implementation plan for the monitoring regimen, Rear Admiral John Kirby, the Pentagon press secretary, said in a statement.

Hagel also called for a review of the decision in 45 days to evaluate “whether or not such monitoring should continue based on what we learn and observe from the initial waves of personnel” returning from the West Africa relief mission, Kirby said.

The Pentagon chief’s action expanded to all U.S. troops returning from Ebola-affected countries a policy that was put into place earlier this week by General Ray Odierno, the Army chief of staff.

Odierno ordered a 21-day isolation period for Major General Darryl Williams, commander of U.S. Army Africa, and nearly a dozen of his staff when they returned from West Africa to their home base in Vicenza in northeastern Italy.

The 21-day isolation period is stricter than what is recommended by U.S. health officials, who call for monitoring but not isolation for people returning from relief efforts who do not have symptoms of the illness.

The Obama administration has been seeking to dissuade U.S. states from imposing quarantines on doctors, nurses and other health workers returning from West Africa and has resisted political pressure to impose travel bans on people coming from the affected area.

But U.S. President Barack Obama appeared to back more rigorous procedures by the military on Tuesday, saying U.S. troops were in a “different situation” compared to healthcare workers.

While civilians may be discouraged from volunteering to help fight the Ebola if they are facing quarantine on their return, troops were sent as part of their mission and could expect such inconveniences, he said.

Hagel told a forum in Washington on Wednesday that “the fact is the military will have more Americans in Liberia than any other department.”

“Our younger cohorts are different. They are not volunteers, and this is also a policy that was discussed in great detail by the communities, by the families of our military men and women, and they very much wanted a safety valve on this,” Hagel said.