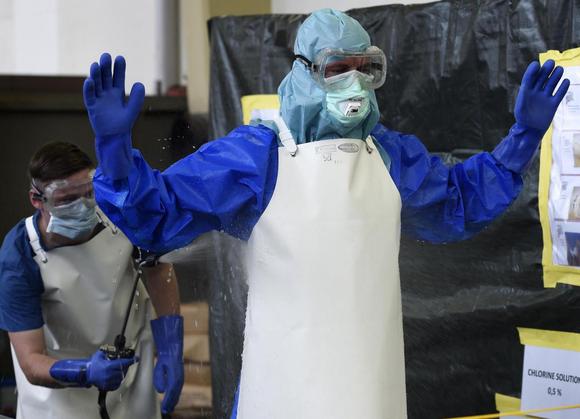 A volunteer of the German army Bundeswehr, wearing a protective suit, is disinfected by a colleague during an Ebola training session at the Marseille barracks in Appen, October 23, 2014.

(Reuters) – A New York City hospital is running Ebola tests on a healthcare worker who returned to the United States from West Africa with a fever and gastrointestinal symptoms, the city’s Health Department said on Thursday.

Preliminary test results were expected in the next 12 hours, the New York City Department of Health and Mental Hygiene said in a statement.

The patient being treated at Bellevue Hospital is a healthcare worker who returned to the United States within the past 21 days from one of the three African countries facing the Ebola outbreak, it said.

The Health Department said it was tracing all of the patient’s contacts to identify anyone who may be at potential risk. It also said the patient had been transported by a specially trained unit wearing protective gear.