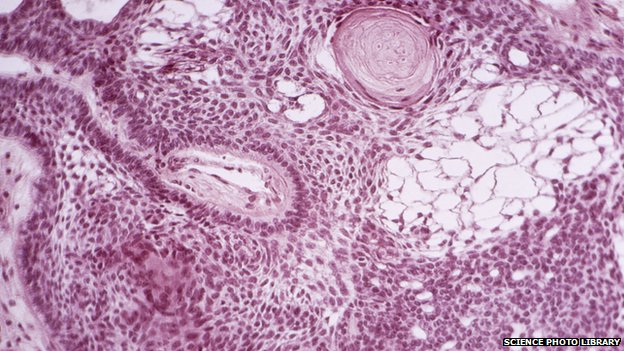 Scientists from Harvard Medical School have discovered a way of turning stem cells into killing machines to fight brain cancer.

In experiments on mice, the stem cells were genetically engineered to produce and secrete toxins which kill brain tumours, without killing normal cells or themselves.

Researchers said the next stage was to test the procedure in humans.

A stem cell expert said this was “the future” of cancer treatment.

The study, published in the journal Stem Cells, was the work of scientists from Massachusetts General Hospital and the Harvard Stem Cell Institute.

For many years, they had been researching a stem-cell-based therapy for cancer, which would kill only tumour cells and no others.

They used genetic engineering to make stem cells that spewed out cancer-killing toxins, but, crucially, were also able to resist the effects of the poison they were producing.

They also posed no risk to normal, healthy cells.

In animal tests, the stem cells were surrounded in gel and placed at the site of the brain tumour after it had been removed.

Their cancer cells then died as they had no defence against the toxins. 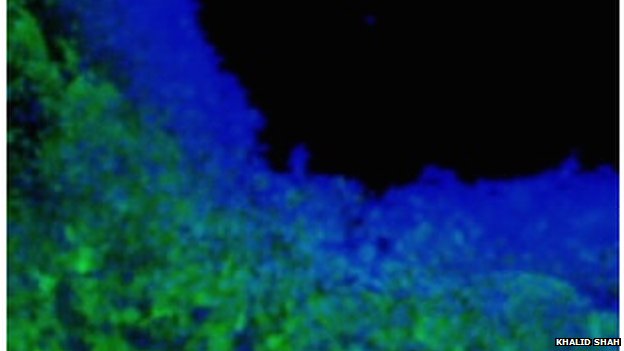 “After doing all of the molecular analysis and imaging to track the inhibition of protein synthesis within brain tumours, we do see the toxins kill the cancer cells.”

He added: “Cancer-killing toxins have been used with great success in a variety of blood cancers, but they don’t work as well in solid tumours because the cancers aren’t as accessible and the toxins have a short half-life.”

But genetically engineering stem cells has changed all that, he said.

“Now, we have toxin-resistant stem cells that can make and release cancer-killing drugs.”

Chris Mason, professor of regenerative medicine at University College London, said: “This is a clever study, which signals the beginning of the next wave of therapies.

“It shows you can attack solid tumours by putting mini pharmacies inside the patient which deliver the toxic payload direct to the tumour.

“Cells can do so much. This is the way the future is going to be.”

“We urgently need better treatments for brain tumours and this could help direct treatment to exactly where it’s needed.

“But so far the technique has only been tested in mice and on cancer cells in the lab, so much more work will need to be done before we’ll know if it could help patients with brain tumours.”

She said this type of research could help boost survival rates and bring much-needed progress for brain cancers.

Dr Shah now plans to test the technique using a number of different therapies on mice with glioblastoma, the most common brain tumour in human adults.

He hopes the therapies could be used in clinical trials within the next five years.