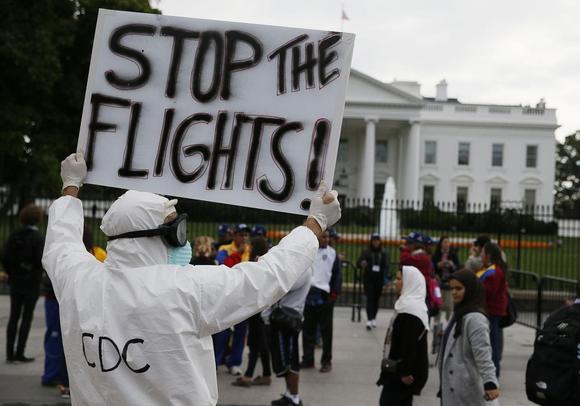 Protestor Jeff Hulbert of Annapolis, Maryland holds a sign as he demonstrates in favor of a travel ban to stop the spread of the Ebola virus, in front of the White House in Washington October 16, 2014.

(Reuters) – Nearly three-fourths of Americans support a ban on civilian air travel in and out of the West African countries that have experienced an Ebola outbreak, a new Reuters/Ipsos poll shows, suggesting growing pressure on President Barack Obama over the issue.

Republicans have been clamoring for a broad travel ban as they campaign ahead of November’s congressional elections, and in recent days a handful of Obama’s fellow Democrats in close Senate races have joined the fray.

New Hampshire Senator Jeanne Shaheen on Monday became the latest Democratic candidate to join a slew of Republicans in being open to a ban. The issue has surfaced in close races across the country as Republicans look to wrest control of the U.S. Senate from the Democrats.

More than 70 percent of poll respondents said they would support blocking all civilian travel in and out of those countries, even as experts questioned how useful such measures would be in containing the disease.

The Obama administration on Tuesday said travelers to the United States from Liberia, Sierra Leone or Guinea must fly into one of five airports with advanced screening procedures, but it has so far resisted calls for a broader travel ban.

While Americans are split over whether all exports from the affected West African countries should be blocked, 58 percent said food exports should be stopped.