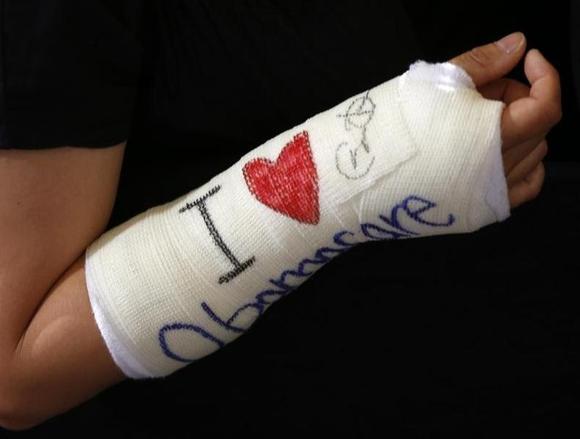 Cathey Park of Cambridge, Massachusetts shows her cast signed by U.S. President Barack Obama after he spoke about health insurance at Faneuil Hall in Boston October 30, 2013.

The total includes 8 million people who selected private plans through state and federal insurance marketplaces and another 4.8 million who enrolled in the Medicaid and Children’s Health Insurance Program, two government programs that serve lower income Americans.

When low-dose CT screening for lung cancer got the thumbs down by a panel looking into Medicare coverage Wednesday, the pulmonology community was shocked and indignant.

The Centers for Medicare and Medicaid national coverage determination advisory group voted low confidence on evidence of a net benefit and on potential to minimize risk for the Medicare population.

Among patients who had their first stroke, the rate of unprovoked seizures after the event was higher than in most previous studies, researchers found.

Through 2 years of follow-up, 6.1% of the patients treated at 31 Italian centers had at least one unprovoked seizure, according to Ettore Beghi, MD, of the Mario Negri Institute in Milan, Italy.

The cumulative time-dependent risk of unprovoked seizures was 5% at 1 year and 10% at 2 years, Beghi reported at the annual meeting of the American Academy of Neurology in Philadelphia.