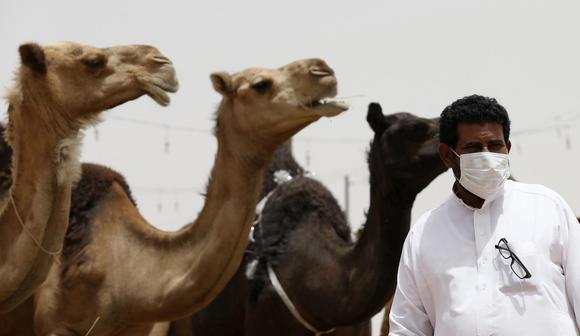 A man wearing a mask looks on as he stands in front of camels at a camel market in the village of al-Thamama near Riyadh May 11, 2014.

(Reuters) – Scientists lack proof that camels are the source of a deadly new virus that has killed 186 people in Saudi Arabia and should widen their hunt to other animals, veterinary experts meeting in Paris said.

Middle East Respiratory Syndrome (MERS) was discovered in Saudi Arabia in 2012 and has since infected more than 650 people worldwide, including in the United States and France. It can cause flu-like symptoms, pneumonia and organ failure in some.

So far, most evidence points to camels as the infection source but there is no certainty yet, making further and wider research indispensable, they said.

“We know nothing on a potential transmission mode between camels and humans, neither on food products from camels which could be involved,” Bernard Vallat, Director General of the World Organisation for Animal Health (OIE), told a news conference.

Juan Lubroth, Chief Veterinary Officer of the United Nations Food and Agriculture Organisation, called for further studies on camels and on other animals including bats, rats and even pets such as cats and dogs.

Bats have been found with a virus close to MERS.

“I think we should keep our mind open and that an investigation where we have very little information has to be wider,” Lubroth said.

Margaret Chan, head of the World Health Organisation (WHO), insisted at the start of the OIE’s general session on Sunday there was still no proof of a link between camels and humans.

“The evidence is by no means conclusive and we need to know this as we issue advice to the public,” she said.

With initial evidence pointing to camels, authorities in infected countries and the WHO called for extra precaution when dealing with the animals such as wearing masks and gloves.

The link with camels is the subject of extensive study among scientists outside Saudi Arabia, but it has been relatively absent from much of the official domestic debate.

The WHO held an emergency meeting earlier this month on MERS. It said there was no evidence of sustained human-to-human transmission of the virus.