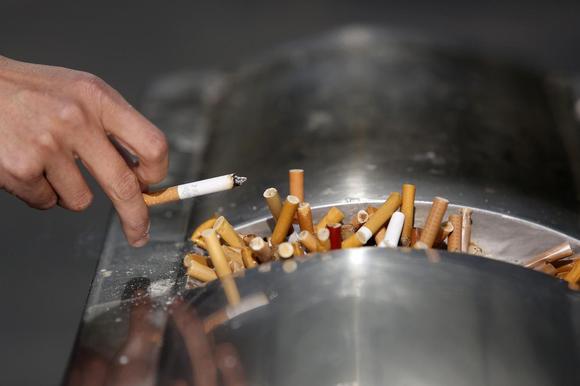 A man flicks ashes from his cigarette over a dustbin in Shanghai January 10, 2014.

(Reuters Health) – A smoker’s coronary artery disease is likely to be as advanced as that of a non-smoker who is 10 years older when both show up at the hospital with a heart attack, according to a new study.

Researchers looked at nearly 14,000 patients hospitalized with blockages in arteries supplying the heart muscle and found smokers were more likely than nonsmokers to die within a year.

Despite their being younger, and otherwise healthier, the smokers’ heart arteries were in a condition similar to those of nonsmokers 10 years older.

Smoking can cause blood clots, which often get lodged in the rigid and narrow arteries that have already been clogged by the buildup of cholesterol and fat deposits, according to Lansky and her colleagues.

Although the fat buildup and stiffening of the artery walls, known as atherosclerosis, becomes more likely with age for everyone, the clots caused by smoking worsen the blockages.

That makes smokers more likely to have a heart attack at a younger age, but less likely to have the other conditions, known as comorbidities, that go along with aging, such as diabetes and high blood pressure.

“Smoking accelerates the manifestation of coronary disease but in the absence of these comorbidities,” Lansky told Reuters Health.

Past research has identified a “smoker’s paradox” – because smokers are younger, with fewer other health problems, when they had a heart attack, they were more likely to recover it. Or so it seemed.

“We wanted to look at longer-term effects of smoking rather just the short term effect,” Lansky said.

The researchers analyzed medical records for 13,819 patients, almost 4,000 of them smokers, hospitalized with chest pain or a heart attack caused by a blocked coronary artery.

The study team organized the data to match the smokers and nonsmokers by age, weight, comorbidities and other risk factors.

When compared to nonsmokers with similar overall health, the smokers were ten years younger, on average, and more likely to have already been treated with blood thinners – suggesting they had already experienced problems with blood flow.

Imaging of the coronary artery showed the smokers’ had atherosclerosis comparable to the nonsmokers ten years their senior, the researchers report in the journal JACC: Cardiovascular Interventions.

But once smokers and nonsmokers with similar health profiles were compared to each other, the smokers were 37 percent more likely to die within the first year.

“What makes it novel, is that we are showing that if you come in, your chance of survival is already reduced, as a smoker,” Lansky said.

The findings are not surprising, according to Dr. Robert Giugliano, a cardiologist at Brigham and Women’s Hospital in Boston.

“Nonetheless, the public does need to know that there is now even more evidence that smoking is bad for your health, accelerates the process of atherosclerosis (so smokers have heart and vascular disease on average 10 years early than non-smokers), and leads to worse outcomes compared to non-smokers of a similar age,” said Giugliano, who also teaches at Harvard Medical School.

Dr. Elliot Antman, also of Brigham and Women’s Hospital and Harvard, said it would be interesting to follow the patients for longer than a year to see what happened to survival rates among smokers who quit.

Antman was not surprised by the findings either. “I always suspected this was the case but it is nice to see the data,” he told Reuters Health.

“There just aren’t many healthy people in their 80’s who smoke regularly . . . if you want to live a healthy, long life, smoking stacks the odds against you,” Giugliano said.