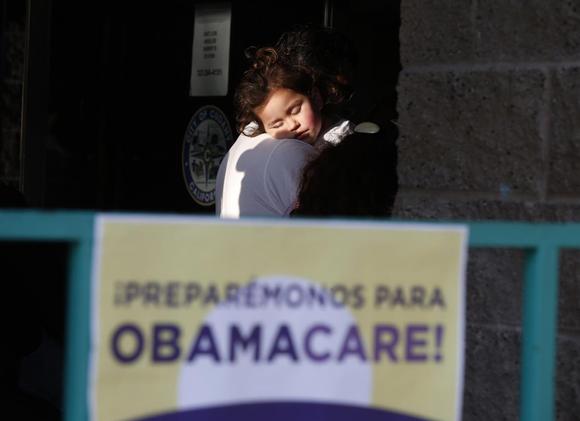 Julissa Esparza, 2, sleeps in the arms of her grandfather Leobardo Salazar, 58, as they wait in line at a health insurance enrollment event in Cudahy, California March 27, 2014.

(Reuters) – The website for people to enroll in U.S. private health insurance faced some delays early Monday morning, just hours before the deadline for the first year of enrollment under the healthcare law.

The HealthCare.gov technology team has begun bringing the site back on line gradually after it found a software bug during their monitoring of the site and fixed it during the regular maintenance window, representatives for the Department of Health and Human Services said in a statement.

A spokeswoman said the site was functioning again.

The agency said the website, which has been plagued by controversial technical problems since it launched in October, “has handled record consumer demand well. “Over the weekend, the site saw 2 million visits,” the government said, and more than 8.7 million visits during the past week.

HealthCare.gov launched in October and quickly crashed. It worked intermittently until a technology overhaul had it working relatively smoothly by December. While the consumer facing part of the site has been working in recent months, there are still some parts of the back-end systems that remain unbuilt.

Americans have until midnight on Monday to obtain health insurance under President Barack Obama’s healthcare law known as Obamacare or else face fines. The administration has softened the deadline to accommodate those who attempt to apply for coverage by Monday night but run into technology issues.

Efforts to access the website Monday morning first generated a message saying “the system isn’t available at the moment” due to “maintenance.” A later attempt cited a delay because of a heavy number of visitors, but then allowed a visitor to start creating an account.

In the statement, representatives for the department said people who visit the insurance exchange website can leave their contact information and enroll online later, or call a hotline to complete their applications.

They said that consumers will be invited back in when the system is available.

On Sunday, the Centers for Medicare and Medicaid Services, the agency charged with overseeing the website, said the online exchange has seen a rush of potential enrollees as the deadline window closes.

The government has said that more than 6 million people have enrolled for healthcare through the website.