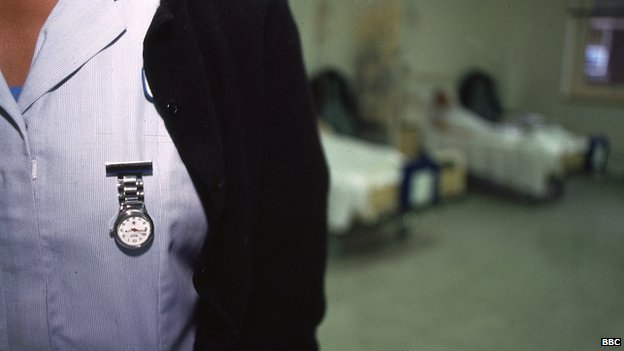 The NMC is the regulator for the nursing profession

The Nursing and Midwifery Council is facing more criticism over its handling of disciplinary cases in a report by the Professional Standards Authority.

In particular, the report highlights failings over the handling of cases relating to the scandal-hit Mid-Staffordshire NHS Trust.

The NMC is responsible for regulating 673,000 nurses and midwives in the UK.

It has previously been accused of failing to protect patients and has admitted “substantial failings” in the past – but says the latest report recognises the progress it has made.

The report by the PSA – the body that oversees health regulators – shows the Nursing and Midwifery Council is struggling to move on from its troubled past.

A huge backlog of cases and long delays led to accusations that it was failing at every level.

This latest report saw the PSA carry out an audit of 100 cases dealt with by the NMC’s disciplinary committee.

The report acknowledged that there had been some improvements under a new management team at the NMC, but outlines a number of areas where the organisation is still failing.

The report adds that there is an ongoing weakness in the NMC’s ability to identify for itself where improvements are needed.

The PSA said: “We were disappointed that the NMC’s internal review (in July 2013) of its handling of cases that involved registrants employed by Mid Staffordshire NHS Foundation Trust did not identify a number of serious issues that we picked up in our audit.”

The report also highlighted concerns over the use of voluntary removal, where a nurse or midwife facing a disciplinary hearing can apply to be removed from the register without a full public hearing.

“We identified concerns in all 21 of the cases we audited that were closed following the grant of applications for voluntary removal, and have urged the NMC’s Council to ensure that our concerns about the NMC’s procedures are addressed quickly.”

Chief executive and registrar of the NMC Jackie Smith said she was pleased the report highlighted the improvements made to the way the disciplinary process for nurses and midwives works.

“We know that there is still more we need to do,” she said.

“However, it recognises the progress we have made and confirms the commitment we made to improving performance.”

But Katherine Murphy, chief executive of the Patients Association, described the findings as “deeply worrying”.

“The NMC is letting down those patients who have received substandard care from these incompetent care professionals who are free to continue to practice.

“It is disgraceful to see that lessons are still not being learnt from the Francis Inquiry and serious issues relating to registrants from the Mid Staffordshire trust have not been picked up.

“The Regulator needs to address these fundamental issues now and act urgently to protect the public.”

“The public expect patients to be protected and this is another instance where the NMC have failed us.