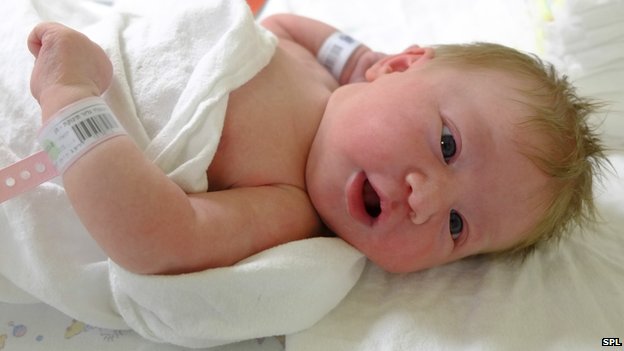 How the creation of babies using sperm and eggs from three people will be regulated in the UK has been announced.

The draft rules will be reviewed as part of a public consultation and could come into force by the end of 2014.

Doctors say three-person IVF could eliminate debilitating and potentially fatal diseases that are passed from mother to child.

Opponents say it is unethical and could set the UK on a “slippery slope” to designer babies.

Using the parents’ sperm and eggs plus an additional egg from a donor woman should prevent mitochondrial disease.

Mitochondria are the tiny, biological “power stations” that provide energy to nearly every cell of the body.

One in every 6,500 babies has severe mitochondrial disease leaving them lacking energy, resulting in muscle weakness, blindness, heart failure and even death.

As mitochondria are passed down from mother to child, using an extra egg from a donor woman could give the child healthy mitochondria.

However, it would also result in babies having DNA from two parents and a tiny amount from the donor as mitochondria have their own DNA.

Scientists have devised two techniques that allow them to take the genetic information from the mother and place it into the egg of a donor with healthy mitochondria.

1) Two eggs are fertilised with sperm, creating an embryo from the intended parents and another from the donors 2) The pronuclei, which contain genetic information, are removed from both embryos but only the parents’ is kept 3) A healthy embryo is created by adding the parents’ pronuclei to the donor embryo, which is finally implanted into the womb

1) Eggs from a mother with damaged mitochondria and a donor with healthy mitochondria are collected 2) The nucleus, containing the majority of the genetic material, is removed from both eggs 3) The mother’s nucleus is inserted into the donor egg, which can then be fertilised by sperm.

The Department of Health has already backed the technique and says this consultation is not about whether it should be allowed, but how it is implemented.

The regulatory body, the Human Fertilisation and Embryology Authority, will have to decide in each cases that there is a “significant risk” of disability or serious illness.

It is anticipated that only the most severely affected women – perhaps 10 cases per year – would go ahead.

The regulations suggest treating the donor woman in the same manner as an organ donor.

Any resulting children will not be able to discover the identity of the donor, which is the case with other sperm and egg donors.

Prof Doug Turnbull, who has pioneered research in mitochondrial donation at Newcastle University, said: “I am delighted that the government has published the draft regulations.

“This is very good news for patients with mitochondrial DNA disease and an important step in the prevention of transmission of serious mitochondrial disease.”

The chief medical officer for England, Prof Dame Sally Davies, said: “Allowing mitochondrial donation would give women who carry severe mitochondrial disease the opportunity to have children without passing on devastating genetic disorders.

“It would also keep the UK at the forefront of scientific development in this area.

“I want to encourage contributions to this consultation so that we have as many views as possible before introducing our final regulations.”

Dr David King, the director of Human Genetics Alert, said this was a decision of “major historical significance” which had not been debated adequately.

“If passed, this will be the first time any government has legalised inheritable human genome modification, something that is banned in all other European countries.

“The techniques have not passed the necessary safety tests so it is unnecessary and premature to rush ahead with legalisation.

“The techniques are unethical according to basic medical ethics, since their only advantage over standard and safe egg donation is that the mother is genetically related to her child.

“This cannot justify the unknown risks to the child or the social consequences of allowing human genome modification.”