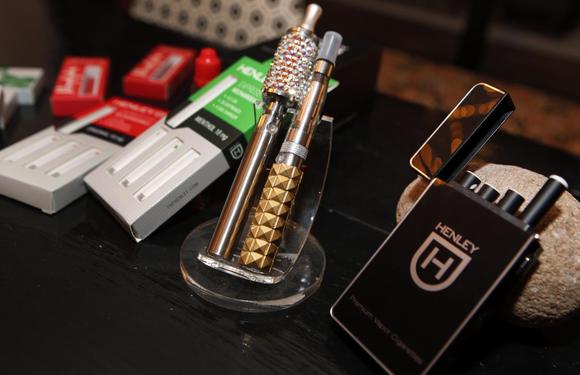 Various e-cigarette products for sale are seen at the Henley Vaporium in New York City December 18, 2013.

WASHINGTON (Reuters) – Lobbyists for electronic cigarette companies have been beating a path to the White House, hoping to prevent the administration from imposing strict, and possibly costly, rules on the burgeoning $2 billion industry.

In November and December, more than 35 organizations including e-cigarette companies, cigar and tobacco makers, trade associations, physician groups, lawyers, lobbyists and public health advocates trooped through the doors of the White House’s Office of Management and Budget.

OMB has been reviewing a rule proposed by the Food and Drug Administration that would bring e-cigarettes under its jurisdiction and could potentially require companies to register and pay fees, list the ingredients in their products, obtain prior approval for new products and restrict online sales and marketing to children.

The OMB, which reviews proposed regulations to assess, among other things, their economic impact, has not given a date for when it will be finished with its review, but officials have not had a meeting with outsiders since January 17 according to public records, suggesting they have heard all they need, or are willing, to hear.

At stake is the future of an industry that some analysts believe will eventually overtake the $80 billion-a-year tobacco business. Advocates of e-cigarettes, which are battery-powered cartridges filled with nicotine liquid that when heated creates an inhalable vapor, say they are less dangerous than tobacco products and can help smokers quit. Public health experts fear they may act as a gateway to smoking for the uninitiated.

Mitch Zeller, head of the FDA’s tobacco division, said in an interview that there is a “continuum of risk” among nicotine products currently on the market, with cigarettes on one end and medicinal nicotine on the other. He declined to say where on the spectrum he expects e-cigarettes to fall or what is contained in the FDA’s proposals. In general, he said, people smoke for the nicotine and die from the tar.

“I’m not saying nicotine is benign, but when compared to the risk associated with regular tobacco, it pales,” he said.

Some, therefore, expect the FDA to exercise flexibility in regulating e-cigarettes.

“It’s not just a matter of a blanket dropping in of the current regulations over additional products,” said Diane Canova, vice president of government affairs at the anti-tobacco American Legacy Foundation, “Some of the current restrictions may not fit.”

A law passed in 2009 gave the FDA the authority to regulate cigarettes, smokeless tobacco and roll-your-own tobacco. It also gave the agency the power to deem other tobacco products to be within its jurisdiction but it must first issue a rule to that effect. E-cigarette companies believe they should be exempt from the full spectrum of regulations, saying they would stifle innovation, damage small business and hurt consumers trying to quit smoking.

Tobacco company Lorillard Inc, owner of the blu e-cigarette brand, is the dominant player in the field, followed by privately-held NJOY and LOGIC Technology. The three account for an estimated 80 percent of the market.

In a November 7 presentation to OMB, representatives for NJOY said that while the company supports product registration and minimum age requirements, it opposes restrictions on TV advertising and sponsorship and any regulation that would subject e-cigarettes to the pre-market approval requirements that traditional tobacco products face.

“The concern is that a product that is constantly changing could be tied up in a very time-consuming process before the products could be legally marketed,” said Bryan Haynes, a lawyer for the Electronic Cigarette Industry Group (ECIG).

The FDA is already working its way through a backlog of nearly 4,000 applications for new or modified tobacco products.

E-cigarettes are sold online and at a variety of retail locations including some gas stations, convenience stores, grocery stores and drug stores.

“We think the proposals will include a potential ban on internet sales because you can’t age verify,” said Vivien Azer, an analyst at Citigroup. The FDA is expected to place age restrictions on who can buy e-cigarettes.

Restricting internet sales would be “devastating to the companies that have built successful businesses online,” said Cynthia Cabrera, executive director of the Smoke Free Alternatives Trade Association (SFATA). “About quarter of the revenue from e-cigarettes come from online sales,” she added.

Another contested area is the use of flavorings. Banned in traditional cigarettes they are used widely in e-cigarettes to produce tastes ranging from pear and passion fruit to butterscotch and banana cream.

Public health advocates say flavorings attract children and threaten to create a new generation of nicotine addicts even the government is trying to create a generation that is tobacco free.

Adult smoking rates have fallen to 18 percent from 43 percent in 1965. Even so, more than 3,200 young people a day under the age of 18 try their first cigarette, a recent government report found. The use of e-cigarettes by young people doubled between 2011 to 2012, according to the Centers for Disease Control and Prevention.

Once the proposed rule is announced there will be a period for public comment, after which the FDA will develop final regulation. The process could take a year or more. In the meantime, critics say e-cigarette companies are using the same promotional techniques that were used for decades by cigarette manufacturers to attract teenagers to their products.

On February 12, two Democratic U.S. representatives, Henry Waxman and Peter Welch, and one senator, Tom Harkin, wrote to the attorneys general in their states to bring electronic cigarettes under the terms of a settlement reached in 1998 with top tobacco companies that prohibited any advertising targeting youth.

“Youth use of these products is particularly troubling since the full extent of e-cigarette harms is not yet understood,” they wrote.

Some e-cigarette companies are already positioning themselves for a more restrictive environment. LOGIC Technology, for one, expects advertising, flavors and online sales to be banned or severely restricted.

“I think what is important is retail locations,” Miguel Martin, LOGIC’s president, said in an interview. “In retail locations, there is age verification. I believe that is where the industry is going and where regulation is going. If you are relying on the internet and TV, I think those vehicles are going to be taken away from you.”

LOGIC’s products taste either of tobacco or menthol only, the flavors allowed with traditional cigarettes.

But Martin, like other e-cigarette companies, wants his industry to be exempt from the requirement that new or modified products be reviewed by the FDA before hitting the market.

In the meantime, OMB officials have mostly kept their thoughts to themselves.

“I’ve been in some of these meetings,” said Eric Criss, president of ECIG. “It’s mostly a one-way conversation.”

(Reporting by Toni Clarke in Washington; Editing by Michele Gershberg and Marguerita Choy)