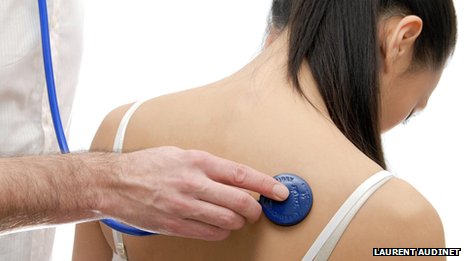 Stethoscopes can pick up bacteria directly from a patient’s skin

Doctors should disinfect their stethoscopes after every examination because the instruments are heavily contaminated by bacteria, a study says.

Stethoscopes were found to carry as many bacteria as the palms of doctors’ hands, and only doctors’ fingertips were ‘dirtier’.

University of Geneva researchers said stethoscopes may contain thousands of bacteria, including MRSA.

Doctors should clean stethoscopes regularly to cut down on transmission.

The study, published in an issue of Mayo Clinic Proceedings, said the hands of healthcare workers were still the main source of bacterial transmission in hospitals, but stethoscopes also appeared to have a major impact.

Lead researcher Dr Didier Pittet, director of the infection control programme at the University of Geneva Hospitals, said the instruments were transmitters of bacteria.

“By considering that stethoscopes are used repeatedly over the course of a day, come directly into contact with patients’ skin and may harbour several thousand bacteria (including MRSA) collected during a previous physical examination, we consider them as potentially significant vectors of transmission.”

Dr Pittet added: “From infection control and patient safety perspectives, the stethoscope should be regarded as an extension of the physician’s hands and be disinfected after every patient contact.”

Dr Clare Taylor, a council member from the Royal College of General Practitioners and a GP in Birmingham, said doctors were “more aware than ever” of the importance of maintaining hygiene standards to protect patients.

She said: “I regularly clean my own stethoscope with alcohol wipes and ensure I wash or sanitise my hands after every patient. It’s part of our role to ensure we do everything we can to prevent the spread of infection.”

The University of Geneva research team carried out tests for bacteria on the diaphragm or metal circular end of a stethoscope, which is put against the skin to listen to the body’s internal sounds, and the tube connecting it to the ear-pieces.

They also measured bacteria levels on four areas of a doctor’s dominant hand – the back of the hand, fingertips and two regions of the palm.

They did this after each of 71 patients had been examined.

Three doctors carried out the examinations using a sterile stethoscope and sterile gloves.

When researchers looked for levels of MRSA contamination (meticillin-resistant staphylococcus aureus) in particular, they found similar high levels of bacteria on stethoscopes and doctors’ hands.

They did not isolate any other bacteria.

The study said further research was needed to understand how stethoscopes could best be disinfected.

More work is also required on how long bacteria survive on stethoscopes and how they are transmitted on to a person’s skin, the Geneva team added.

The British Medical Association said there was no evidence of infections coming from stethoscopes.