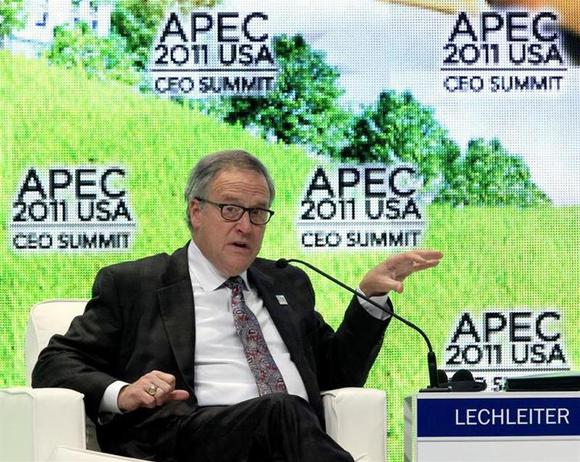 “It’s time to go back on offense,” Lechleiter said in a recent interview. New treatments for diabetes and cancer now awaiting approval and increased sales of animal-health products and drugs in China and Japan are some of the aggressive moves he has in mind.

He is also counting on a robust success rate among three dozen other experimental drugs now in mid- and late-stage trials, including a cancer drug called ramucirumab.

“We’re on the cusp of launching products in cancer and diabetes, two therapeutic areas where we’re well established and where we have built out the infrastructure we need,” Lechleiter said. “And we believe that’s going to be the beginning of our return to growth.”

Skeptical investors only now appear to be catching on to Lilly’s potential upside. After rising only 3 percent in 2013, badly underperforming a 27 percent average advance for other large drugmakers, the stock is up 6 percent this month.

“Instead of having to play defense and manage through this difficult patent cliff, the company will be able to use additional cash flow to invest in its pipeline, to partner with others or make bolt-on acquisitions,” said Atlantic Equities analyst Richard Purkiss. “The outlook is much brighter, and they’ll try to get that message across in coming months.”

Lilly, which reports quarterly and 2013 results on Thursday, has forecast earnings of $2.77 to $2.85 per share this year, the final and worst year of its patent cliff. That’s 41 percent less than 2010.

‘THE PIPELINE WILL DISAPPOINT’

Lilly last year sought U.S. approvals for four drugs, three of which Lechleiter said could be approved in 2014: ramucirumab for stomach cancer, and dulaglutide and empagliflozin for type 2 diabetes – the most common form of diabetes, which is closely linked to obesity.

Analysts have forecast annual sales of more than $650 million for ramucirumab, saying sales could be far higher if the drug also wins approval for cancers of the colon, lung or liver. But they caution that the diabetes drugs may have a hard time competing against existing options.

Lechleiter said Lilly plans to seek approval of necitumumab for squamous-cell lung cancer this year. The medicine, like ramucirumab, was acquired by Lilly through its $6.5 billion purchase of ImClone Systems in 2008.

If approved, necitumumab could capture eventual annual sales of more than $1 billion, analysts say. Such sales could make a big difference for Lilly, whose annual revenue of $20 billion is far lower than Big Pharma rivals like Pfizer Inc and Merck & Co.

In the meantime, Lilly is testing nearly 40 medicines in mid- and late stage studies, compared with only 7 in those stages of development a decade ago. They include new treatments for cholesterol, psoriasis, lupus, rheumatoid arthritis and Alzheimer’s disease.

Animal health unit Elanco, with annual sales of about $2 billion, is thriving as Lilly introduces new products and has expanded the business in China and other fast-growing markets.

Many analysts are wary, however, of the company’s ability to win approvals of prescription drugs because it has not launched any major products in recent years and has suffered setbacks in clinical trials, including ramucirumab’s failure to delay progression of breast cancer.

Of 20 analysts tracked by Thomson Reuters, 12 have hold or sell ratings on Lilly, versus 8 with buy ratings. Lilly shares trade at 19 times expected 2014 per-share earnings, compared to a price-to-earnings ratio of 14.6 for other large drugmakers. That could be more a reflection of the company’s poor earnings this year than excitement about the stock.

“We believe that overall the pipeline will disappoint investors,” said Alex Arfaei of BMO Capital Markets in a research note, citing low sales expectations for ramucirumab and the new diabetes drugs.

When Lilly’s Zyprexa was confronted with cheaper generic treatments for schizophrenia in October 2011, it faced one of the industry’s steepest patent cliffs ever, quickly losing 80 percent of its onetime $5 billion in annual sales.

Many other large drugmakers, when faced with patent expirations and earnings declines of lesser scope, have resorted to megamergers to cushion the blow from generics and prop up earnings with cost savings. Huge layoffs, sapped morale and poor track records in introducing new drugs are more common results.

Pfizer Inc stands out, having snapped up U.S. rivals Warner-Lambert, Pharmacia and Wyeth since 2000.

Lechleiter, who began his career at Lilly in 1979 as a senior organic chemist, has steadfastly spurned any suggestion of a big merger: “It’s never entered our minds, and we remain adamantly opposed.”

John Boris, an analyst for Suntrust Robinson Humphrey, said he expects Lilly earnings to grow an average of 10 percent a year between 2015 and 2020, which would make it second to Bristol-Myers Squibb Co in profit growth over that period.

Atlantic Equities’ Purkiss said he anticipates Lilly will deliver industry-topping earnings growth in the “mid-teens” percentage range in 2015, 2016 and 2017.

“The sentiment has been very negative on Lilly, but it looks like it will go from one of the most growth-starved to the fastest growing of the major U.S. drugmakers and the European players,” Purkiss said.

By avoiding a disruptive megamerger, Lilly has allowed itself to press ahead with ambitious research, said Barclays analyst Tony Butler. He said to date the company has met long-term sales and earnings forecasts it provided in 2009 – before patents went over the cliff – while maintaining its generous dividend, with a current yield of 3.6 percent.

“At the time, the market was incredibly skeptical about Lilly’s ability to fund its dividend and to have enough remaining cash flow to fund its business,” said Butler. “Lilly proved everybody wrong.”