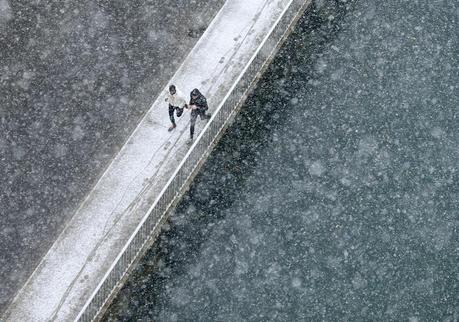 Two joggers run along the embankment of Aare river during the first snowfall in Bern November 21, 2013.

NEW YORK (Reuters Health) – A generally active life, even without regular exercise sessions, was tied to better heart health and greater longevity in a study of older Swedes.

Based on nearly 3,900 men and women over age 60 in Stockholm, the study adds to evidence suggesting that just sitting around may be actively harmful, researchers say.

“We have known for 60 years that physical activity is important for the heart,” said lead author Elin Ekblom-Bak, of the Ã…strand Laboratory of Work Physiology of the Swedish School of Sport and Health Sciences in Stockholm.

But until recently the research has mainly focused on exercise and has “forgotten” about the background activity that we do during daily life, she told Reuters Health.

Whether someone exercises vigorously or not, it still usually only takes up a small fraction of the day. That leaves the rest of the time for either sitting still or engaging in non-exercise activities, like home repairs, lawn care and gardening, car maintenance, hunting or fishing.

For older people, who tend to exercise vigorously less than younger people, spending more time doing low-intensity activities like these could help cut down on sitting time, Ekblom-Bak and her colleagues write in the British Journal of Sports Medicine.

Between 1997 and 1999, more than 5,000 60-year-olds were invited to participate in the study, which began with a questionnaire about health history, lifestyle and daily activities, as well as medical tests and measurements.

At the study’s outset, people who were more active on a daily basis, regardless of their exercise levels, tended to have smaller waists and healthier cholesterol levels.

The participants were followed for the next 12.5 years. During that time nearly 500 people had a first-time heart attack or stroke, and nearly 400 people died from any cause.

People who had reported high levels of daily non-exercise activity were less likely to suffer a heart-related event and less likely to die than those who were the least active.

For every 100 people reporting low activity levels who had a heart attack or stroke, for example, only 73 highly active people experienced such events. For every 100 of the least active who died, only 70 of the most active did.

“These are fascinating findings,” said David Dunstan, of the Baker IDI Heart & Diabetes Institute in Melbourne, Australia, “but not really surprising since other studies that have looked at this from a different angle – that is, describing the detrimental relationship between excessive sitting and mortality outcomes – are essentially showing the same thing but in reverse because there is such a high correlation between sitting time and nonexercise physical activity behaviors.”

While sitting, muscles do not contract and blood flow decreases, which reduces the efficiency of many body processes, like absorbing glucose from the blood, said Dunstan, who studies heart health and exercise.

“In addition to engaging in regular health enhancing exercise, people should be encouraged to also think what they do during the long periods in the day in which they are not exercising,” he said in an email.

“Engaging in regular exercise is still important,” Ekblom-Bak said. “We saw that those who exercised regularly and that also had a daily physically active life had the lowest risk profile of all.”

But it is important for doctors and society in general to promote daily activity, not just exercise, she said.

“Human beings are designed to move,” said Phillip B. Sparling, a professor of Applied Physiology and Health Behavior at the Georgia Institute of Technology in Atlanta who was not involved with the new study.

“Ideally, we should have a mix of all levels of activity,” he said. “But, regardless of whether one exercises or not, the new message is to move more and sit less throughout the day.”