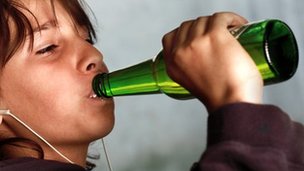 Nearly 300 children aged 11 or under were admitted to A&E units across the UK last year after drinking too much, a BBC Radio 5 live investigation shows.

Revealing UK-wide data for the first time, it said a total of 6,500 under-18s were admitted with alcohol-related illnesses in 2012-13.

The data came from 125 of the 189 UK NHS organisations following Freedom of Information requests.

More girls than boys are now being admitted, a reversal of the past trend.

Over the last five years A&E departments across the UK have dealt with nearly 48,000 incidents where under-18s have been admitted for drink or drug related illnesses.

Ayrshire and Arran Health Board dealt with the highest number of cases last year – with 483 alcohol-related admissions.

Morten Draegebo, an A&E consultant at Cross House Hospital in Kilmarnock, said children were exposing themselves to significant danger.

He said: “There is a problem with their ability to defend themselves. The typical patient may be found in a field.

“They often need to hide away from any sort of adults in the area so they’re picked up by the ambulance service.

“They have difficulty locating where they are because the description comes through from a distressed half-drunk teenager potentially saying that they’re under a tree somewhere in a large park.

“Eventually they’re found but even in summer-time in Scotland they’re vaguely hypothermic.

“They have vomited. The vomit may go down the wrong way into the lungs. They are unable to defend themselves even from assault.”

Dr Draegbo added: “We have had many cases where teenage, young teenage females have come in saying that they may have been sexually assaulted and they’re that intoxicated and are distressed and say, ‘I may have been’, but they don’t even know if they have been or not.

“On a humane level that is very distressing. I’m a parent, I would hate for that to happen to my daughter.”

Charities and public health bodies agree fewer children are drinking across the UK, but say the amount being consumed has stayed the same – suggesting those who do drink are drinking more.

Public Health England says one in four underage drinkers consumes more than 15 units a week – the equivalent of seven pints of lager.

The official advice from the chief medical officers across the UK is that no children should be given alcohol until they are 16, and alcohol should only be given to older teenagers under supervision of a carer or parent, and never on more than one day a week.

A Department of Health England spokesman said: “We know that fewer young people are drinking and being admitted to hospital as a result.

“But with more than one million alcohol-related hospital admissions overall in the last year we know too many people are drinking too much and that alcohol places a heavy burden on the NHS, costing around £3.5bn every year. “

Hear more on the Victoria Derbyshire programme at 10:00 BST on Monday 30 September on BBC Radio 5 Live.