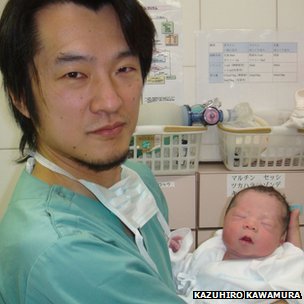 A baby has been born through a new technique to “reawaken” the ovaries of women who had a very early menopause.

Doctors in the US and Japan developed the technique to remove the ovaries, activate them in the laboratory and re-implant fragments of ovarian tissue.

The technique, reported in Proceedings of the National Academy of Sciences, has resulted in one baby being born with another expected.

The findings were described as early, but a “potential game-changer”.

The 27 women involved in the study became infertile around the age of 30 due to ‘primary ovarian insufficiency’. The condition affects one in 100 women who essentially run out of eggs too young, leading to an early menopause.

Women have a fixed number of eggs at birth and those with the condition tend to use them up too quickly or are born with far fewer eggs in the first place.

Eggs in the ovaries are not fully formed; rather, they stay as follicles and some mature each month.

The teams at Stanford University, US, and St Marianna University School of Medicine, Japan, were trying to activate the last few remaining follicles, which may be present.

They removed the ovaries from the women and used a combination of two techniques to wake up the sleeping follicles. First they cut the ovaries into fragments, which has been used in the past as a fertility treatment. Then a chemical to “take the brakes off” egg development was applied.

The fragments were put back at the top of the fallopian tubes and the women were given hormone therapy.

Following the treatment, residual follicles started to develop in eight women. Eggs were taken for normal IVF and so far one couple has had a baby and another woman is pregnant.

Prof Aaron Hsueh, from Stanford, told the BBC: “It has to be improved to figure out the best way to do it, but we estimate it could help 25 to 30% of the women.

“We think it could help in two other forms of infertility. Cancer survivors after chemotherapy or radiotherapy; if there’s any follicles left there’s a chance this will help.

“And also women aged 40 to 45 with an irregular menstrual cycle.”

The end of the menopause?

Some reports have described this study as “beating the menopause” – so does it?

It is certainly an exciting, if early, development for those who go through the ‘early menopause’. Yet even for these women, far more research is needed before it could be considered as a therapy.

But what about the ‘conventional menopause’ in women normally over the age of 50?

This technique is very unlikely to help any women have children at this stage.

Even if they had follicles which could be cajoled into becoming eggs there would be issues of quality.

Women are born with all the eggs they will ever have; as time goes by they deteriorate. And as the quality falls, the odds of successful pregnancy plummet dramatically.

The difference between the eggs of a 25-year-old and a 50-year-old is huge.

As Prof Nick Macklon from the University of Southampton put it: “Quality and quantity are two very different things.”

The implications for women with early menopause are still unclear as the technique will require further testing and refinement before it could be used in clinics.

Prof Charles Kingsland, from Liverpool Women’s Hospital and the Royal College of Obstetricians and Gynaecologists, said: “It’s really clever, but will it work for everyone? We don’t know.

“It’s potentially really, really, interesting, but we need a lot more investigation to confirm this is not another false dawn.

“I will see primary ovarian insufficiency on a regular basis in my clinic so if it’s effective in the long term, it’s something we’d be interested in.”

Prof Nick Macklon, from the University of Southampton, told the BBC: “Finding a new way to get new eggs by waking up sleeping follicles is very promising. It’s potentially a game-changer.

“It’s a very important and very exciting piece of science, but it is not ready for the clinic. It still needs good randomised control trial data.”

He added that performing the technique outside of a research study would be unfeasible, but a deeper understanding of the mechanisms of egg development could lead to new medications.