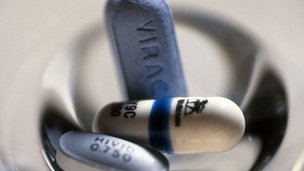 People with HIV will be given medication much earlier

The World Health Organization (WHO) is recommending that patients start taking medication at a much earlier stage of the disease.

The WHO says the guidelines, which are being launched at an international Aids conference in Kuala Lumpur, could help avert an extra 3m Aids deaths by 2025.

The charity MSF welcomed the move – but said extra investment would be needed.

A single pill combining three drugs will be given to people who are HIV positive much earlier, while their immune systems are still strong. Algeria, Argentina and Brazil are already doing this.

Not everybody who needs the medicine currently receives it, although big strides have been made in recent years in widening access to HIV treatment.

The WHO says these guidelines represent a “major shift” in policy, and will result in the number of people in developing countries who are eligible for drug treatment rising from 16m to 26m, or 80% of the total who are thought to have HIV.

It is thought the guidelines will add 10% to the $23bn (£15bn) overall cost of treating HIV/AIDS in developing countries.

WHO believes global donors and the affected countries themselves will be convinced that the idea is cost-effective.

It agreed the policy after a year-long consultation, in which evidence about the role earlier treatment can play in reducing transmission of the virus was considered.

The WHO’s HIV/Aids director, Dr Gottfried Hirnschall, said: “It will be very difficult to end Aids without a vaccine – but these new guidelines will take us a long way in reducing deaths.

“We also want to see better monitoring of patients, so they can see how well they’re doing on the treatment.

“This is not only about keeping people healthy and alive – the anti-retroviral drugs block transmission, so there is the potential for a major impact in preventing epidemics within different countries.”

Five companies make the daily combination pill, which can cost about $127 for a year’s individual treatment in countries where price reductions have been negotiated.

The WHO says there is an “encouraging trend” of countries using their own finances to fight the HIV/Aids epidemic such as Zimbabwe, which has successfully used a levy on mobile phones.

The new recommendations also include providing drugs to all children under five with the virus, all HIV-positive pregnant and breastfeeding women and to people whose partner is uninfected.

In all of these cases, treatment would start regardless of how far the condition has damaged their immune system.

Dr Hirnschall added: “We are still seeing young children lagging behind in terms of access to treatment. Two-thirds of adults that need anti-retroviral drugs get them, but only a third of young children.”

The Global Fund – set up to fight Aids, tuberculosis and malaria – welcomed the guidelines as “very timely”.

Its executive director, Dr Mark Dybul, said: “This is an example of how the Global Fund and the WHO work together to support countries as we move towards removing HIV as a threat to public health.”

MSF (Medecins Sans Frontieres / Doctors Without Borders) warned extra political and financial support would be needed for implementing the recommendations, which it said were “ambitious but feasible”.

MSF medical co-ordinator in South Africa Dr Gilles van Cutsem said: “With these new guidelines our collective goal should now be to scale up without messing up: to reach more people, retain them on treatment, and with an undetectable viral load.

“There’s no greater motivating factor for people to stick to their HIV treatment than knowing the virus is ‘undetectable’ in their blood.”

Paul Ward, deputy chief executive at the UK’s Terrence Higgins Trust, said: “These guidelines have implications for the UK and would expand the number of people eligible for HIV treatment.

“Using treatment to reduce transmission is a key part of modern prevention efforts, including our own.

“In the UK, we have some of the best treatments in the world, and offering them earlier could be one way of slowing the spread of the epidemic. It could also improve the person’s own long-term health.”