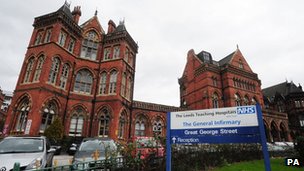 Clinicians say the ‘wrong’ data was used by NHS managers

Children’s heart surgery was wrongly suspended at Leeds General Infirmary because of “incomplete” information, a senior doctor has said.

The unit was shut after the NHS medical director said data showed mortality figures were higher than expected.

But cardiologist Elspeth Brown said the data did not include all the operations, and that staff were confident in their clinical work.

Ms Brown told the BBC that, since the announcement, she and colleagues had been examining the data that was used to make the decision.

“We do now know that the figures that were presented… were simply wrong, they were incomplete, did not include all the operations in Leeds, and that they had then been subject to some statistical analysis which generated this headline figure.

“We’ve been looking very hard at the figures over the last three years and we are confident that our mortality figures are well within what would be expected. All the clinicians in Leeds are very happy with our figures at present.”

The hospital is at the centre of a long-running dispute over the future of children’s heart services, and an NHS review said surgery would be better focused at fewer, larger sites.

However, the High Court ruled just last week that the Leeds unit should be kept open – a move that was superseded a day later by Sir Bruce suspending surgery.