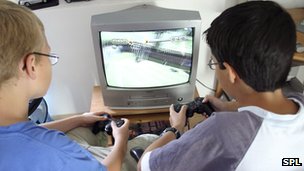 A study of 10-year-olds who played 12 hours of an “action” video game found it improved their reading speed without any cost to accuracy.

The effects were equivalent to more than a year’s worth of reading development, the Italian team reported in Current Biology.

But more research was needed before games could be considered a treatment.

Their work builds on earlier research in which they linked dyslexia with early problems in visual attention rather than language skills.

They selected a fast-moving game requiring a high degree of perceptual, cognitive, and motor skills as well as being unpredictable and involving peripheral processing.

And their reading and attention skills were compared before and after with 10 children not exposed to the game.

The researchers found those who had played the video games had better attention skills than before.

And they were able to read faster without losing any accuracy, the team from the University of Padua reported.

“Dyslexic children learned to orient and focus their attention more efficiently to extract the relevant information of a written word more rapidly.”

He explained that attention should be thought of as a “spotlight” that can be moved, and adjusted in its size, in the visual field.

When the spotlight is on a portion of the visual field, the details will be enhanced, the contrast improved and so on, while everything that is outside of this spotlight will be inhibited.

The video games may be working to train the part of the brain responsible for attention and motion perception, he added.

“These results are very important in order to understand the brain mechanisms underlying dyslexia, but they don’t put us in a position to recommend playing video games without any control or supervision,” he said.

The team are now planning to look at the effects of video games on the prevention of dyslexia in children before they learn to read.

Dr Kate Saunders, chief executive of the British Dyslexia Association, said it was a complex condition but for some individuals part of the problem may include difficulty with aspects of visual perceptual skills, and visuo-motor coordination and attention.

She added that more research was needed to establish whether repeated play on some targeted computer games could help build certain visual and attention related skills.

“There are questions, however, as to the extent that skills transfer from one situation to another and would be retained in the longer term.”