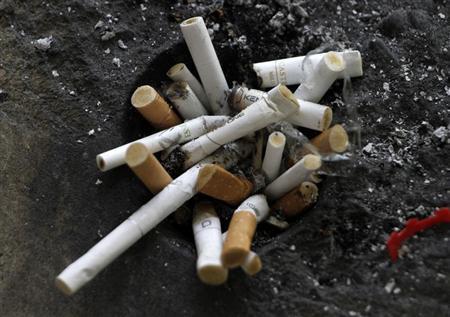 Cigarette butts in an ashtray in Los Angeles, California, May 31, 2012.

NEW YORK (Reuters Health) – A calculation based on results from a large lung cancer screening trial projects that 12,000 deaths a year among the highest-risk smokers and ex-smokers in the U.S. could be avoided with a national screening program.

The National Lung Screening Trial, published in 2010, found 20 percent fewer deaths from lung cancer in a group of people at highest risk for the disease when they were screened annually with CT scans, a form of high-resolution X-ray that can spot suspicious lung nodules.

Based on the 8.6 million Americans who would fall into that high-risk category because of a decades-long history of smoking, researchers at the American Cancer Society say in a new study that 12,000 fewer people a year would die of lung cancer if national screening were put in place.

“This is the first paper that attempts to assess the impact of screening on lung cancer cases nationally,” one of the authors, Ahmedin Jemal, told Reuters Health. “Twelve thousand is a lot of cases,” he said.

In the National Lung Screening Trial, current or former smokers between the ages of 55 and 74 who had accumulated 30 “pack-years” of smoking – for example by smoking 20 cigarettes a day for 30 years, or 40 cigarettes a day for 15 years – were considered to be at the highest risk for lung cancer.

The 20 percent reduction in deaths among people in that category in the trial was “a singular, enormous accomplishment” said Larry Kessler, of the University of Washington in Seattle, who studies the diagnostic value of screening technologies.

“That was a pivotal event that should have woken people up,” said Kessler, who also wrote an editorial accompanying the new study in the journal Cancer.

To put a number on the potential benefits demonstrated in the NLST, the American Cancer Society researchers used U.S. census and health survey data to calculate the number of Americans at highest risk for lung cancer.

About 60,000 of those people die from lung cancer every year, according to their estimates, which could be reduced to 48,000 if every one of those people had a CT scan to identify early-stage nodules that could be removed surgically.

A national screening program would represent a breakthrough in the battle against lung cancer, which kills about 160,000 people in the U.S. every year, the researchers argue. Other major killers like breast cancer and colon cancer can be screened for with mammograms and colonoscopies, but lung cancers are too often caught too late for life-saving treatment, they point out.

Although the prospect of reducing deaths by 20 percent sounds significant, there’s a reason screening hasn’t been adopted since the NLST results came out two years ago, cautions Paul Pinsky, of the Division of Cancer Prevention at the National Institutes of Health in Bethesda, Maryland.

“You could do a quick back of the envelope calculation and come up with something pretty close to this,” said Pinsky, who was not involved in the new study. “At most it’s a rough ballpark of the potential effect if CT screening were introduced in a mass way.”

The numbers probably wouldn’t translate to a real world situation, however, because not every eligible smoker or ex-smoker will want to be screened, and if they did, there wouldn’t be enough imaging centers with the expertise to handle the testing, Pinsky said.

And even in a best-case scenario, questions about national lung cancer screening remain, according to Kessler.

“There are two pieces missing,” Kessler said. “Screening costs money, and someone’s got to pay. And it also comes with risks.”

When not covered by insurance, a CT scan can cost between $500 and $1500. If the Unites States Preventative Services Task Force (USPSTF), a government-backed advisory group, decides to recommend lung cancer screening for people at high risk, then the Affordable Care Act dictates it must be covered by Medicare, Kessler notes. Then insurance companies may follow suit, as they often take their cues from Medicare.

Even if the screening were made more affordable, Kessler said, it would still be unrealistic for 100 percent of eligible people to be screened, especially because smokers tend to be more reluctant to go in for tests.

Moreover, screening comes with risks that haven’t yet been assessed, he added. Lung CT scans are prone to false positives – they identify suspicious nodules that turn out to be harmless or a benign form of cancer. But, as in all screening, false positives can cause patients real anxiety and lead to further painful, invasive and expensive testing. (See Reuters Health story of May 21, 2012 here: reut.rs/JLpCvs).

False positives can also lead to unnecessary surgery, which is especially dangerous, Kessler said. “With surgery, you have to be careful in the lung arena. You can’t cut out every lung nodule, like you can take out any colon polyp.”

While screening risks and benefits are being assessed, the focus should remain on helping people to quit smoking as the best way to prevent lung cancer deaths, Kessler said.

“Screening is important, but it’s not really a substitute for smoking cessation,” Jemal agreed.