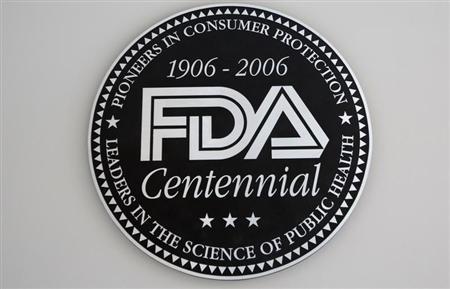 A view shows the U.S. Food and Drug Administration (FDA) logo at the lobby of its headquarters in Silver Spring, Maryland August 14, 2012.

Depomed’s shares rose 8 percent on optimism that its drug, which failed to meet pre-defined efficacy goals in studies, may still be approved to address an estimated $1.5 billion market.

Depomed’s Sefelsa was effective in reducing the frequency and severity of hot flashes related to menopause after four weeks of treatment in studies, but results varied after 12 weeks of treatment, FDA staff observed in a report posted online on Thursday. (r.reuters.com/jyx36t)

Japanese drugmaker Hisamitsu’s paroxetine mesylate capsules was shown to be more consistent at reducing the incidence of the condition than at reducing the severity of flashes. (r.reuters.com/fab46t)

Both drugs are vying to become the first approved, non-hormonal drug to treat menopausal hot flashes.

Most women going through menopause experience these flashes, a complex set of feelings that start with warmth and redness, accompanied by sweating, palpitations and anxiety that typically lasts several minutes.

About 13 million of nearly 32 million women who experience hot flashes during menopause seek treatment in the United States, according to Depomed.

The only approved and most effective treatment for the condition is traditional hormone replacement therapy, but it has shown to increase the risks of breast cancer and heart stroke.

This prompted off-label use of paroxetine mesylate and gabapentin, the chemical name of Sefelsa, which are both widely available generics and shown to be moderately effective in treating hot flashes in some studies.

Depomed already sells gabapentin as Gralise to treat shingles-related pain and the drug added about $7.6 million to the company’s total sales in the October-December period. Paroxetine mesylate is sold as Paxil and Pexeva, among other trade names, to treat depression and anxiety.

The FDA staff’s comments on the marketing applications of the two drugs will be used by an advisory panel to the U.S. Food and Drug Administration, when it meets to review the drugs on Monday.

The FDA will take the panel’s analysis of the drugs into account when it delivers a final decision on Sefelsa by May 31 and on Hisamitsu’s paroxetine mesylate by June 28.

Analyst Jim Molloy of Janney Capital Markets said he continues to recommend buying Depomed stock as he estimates that the FDA panel will vote in favor of Sefelsa.

The staff noted on Thursday that suicidal risks persisted with both drugs.

In late-stage studies, Sefelsa did not show consistent and meaningful reduction in the frequency and severity of hot flashes, but Depomed still submitted a marketing application last July, saying it believed the data warranted a review by the regulator.

Depomed shares have gained about 13 percent since then. The stock, which rose as much as 8 percent to $6.65, was trading at $6.48 Thursday afternoon on the Nasdaq.

(Reporting by Zeba Siddiqui in Bangalore; Editing by Anthony Kurian)