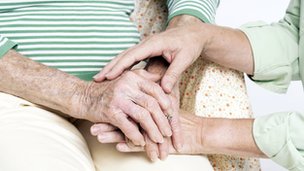 The number of people with dementia is on the rise

More than 320,000 of the 400,000 people living in care homes in England, Wales and Northern Ireland now have dementia or severe memory problems, the Alzheimer’s Society charity estimates.

It said the figure was almost 30% higher than previous estimates because of the rise in the ageing population and improvements in data collection.

Another two-thirds felt the sector was not doing enough to tackle abuse.

And just 41% of 1,100 family members and carers surveyed thought their loved ones’ quality of life was good

“Throughout our lives we demand the best for ourselves and our children. Why do we expect less for our parents?

“We need government and care homes to work together to lift up expectations so people know they have the right to demand the best.”

David Rogers, of the Local Government Association, which represents councils, said: “This report shows the lack of confidence in a care system which is buckling under the weight of rapidly growing demand and years of underfunding.

“Local authorities want to offer a service which goes beyond a basic level of care but this is becoming increasingly difficult as our population ages, costs climb and the already significant funding shortfall becomes even more severe.”