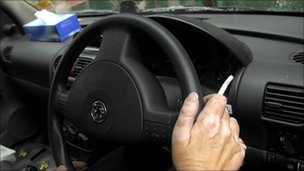 Anna Soubry said her personal view was that it was justified on “child welfare” grounds.

The move has been called for by several health groups, although so far the government has resisted.

The prime minister has said while he supports the smoking ban in pubs and clubs, he is “more nervous” about legislating what happens in cars.

At the Local Government Association’s annual public health conference, Ms Soubry said: “I would ban smoking in cars where children are present.

“I would do that for the protection of children. I believe in protecting children. I would see it as a child welfare issue.

“I think it is something we should at least consider as government.”

Ms Soubry, who is a former smoker herself, made it clear to the audience she was expressing her own views.

While the government is not considering a ban currently, it has run marketing campaigns aimed at encouraging people not to smoke in the presence of their children at home or in cars.

A survey by the Department of Health last year found that more than one in five smokers lit up in front of their children in the home or in cars.

Children are particularly vulnerable to secondhand smoke due to their higher breathing rate, less well-developed airways, lungs and immune system.

Those exposed are more at risk of respiratory illnesses, asthma, meningitis and even cot death.

Research shows that 300,000 children in the UK visit the GP each year due to second-hand smoke with 9,500 visiting hospital.